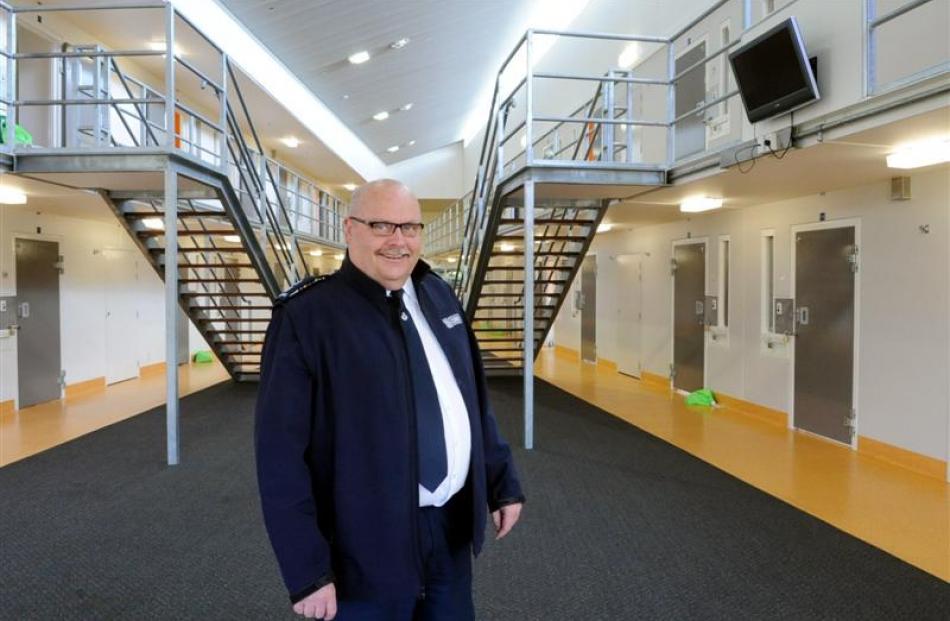 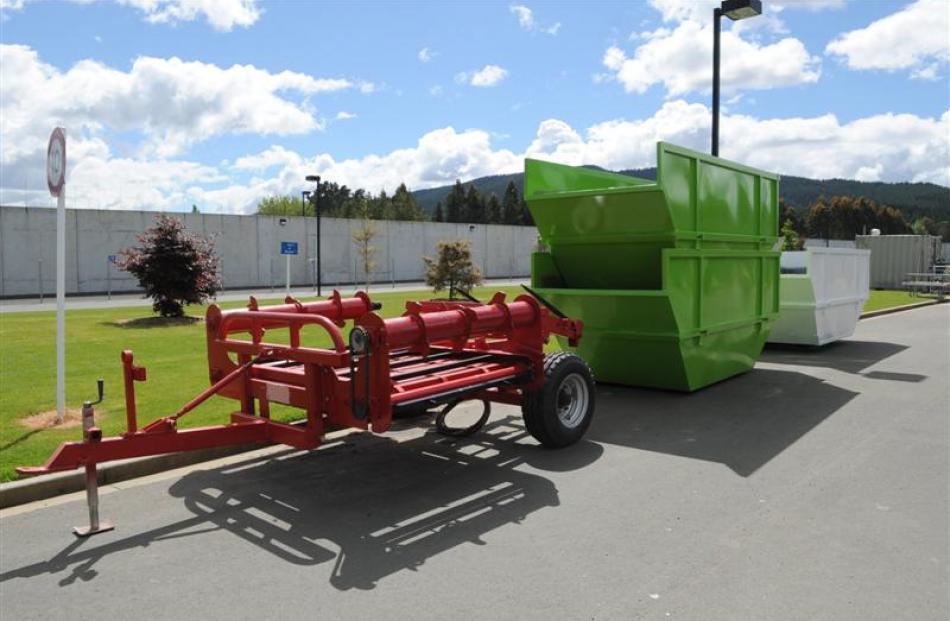 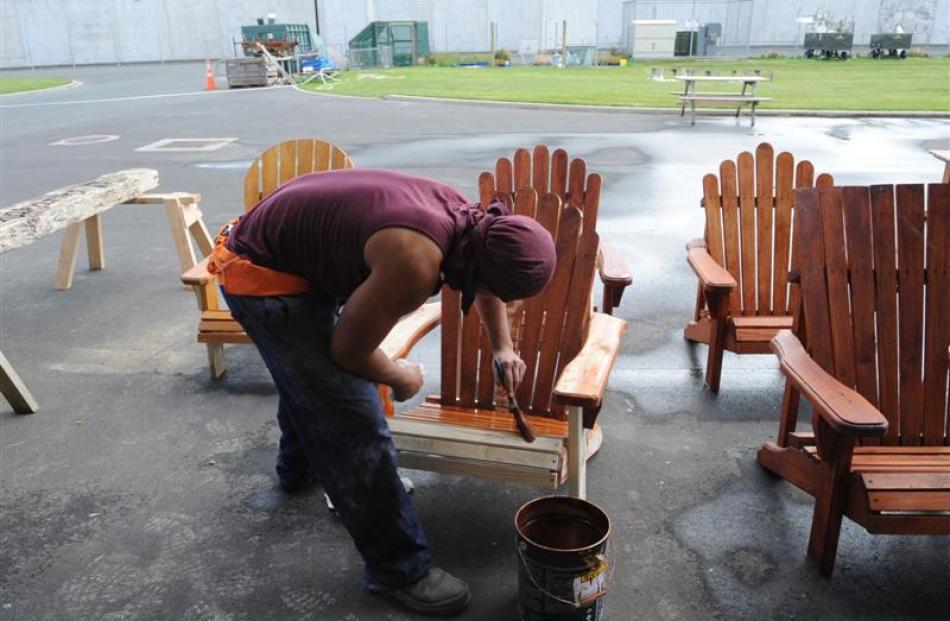 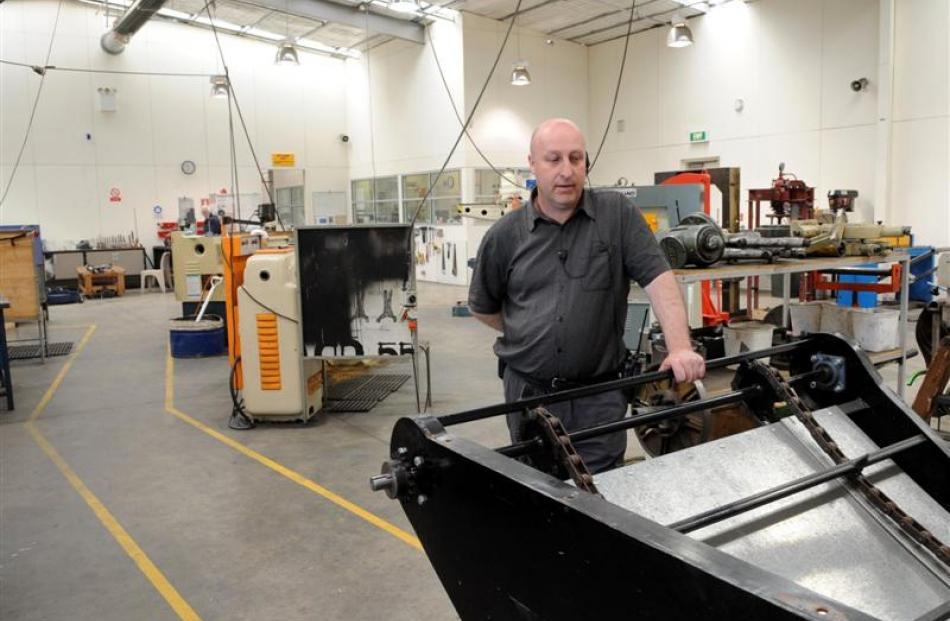 Engineering instructor Allan Tapp with a bale buggy made by prisoners in the light engineering workshop. 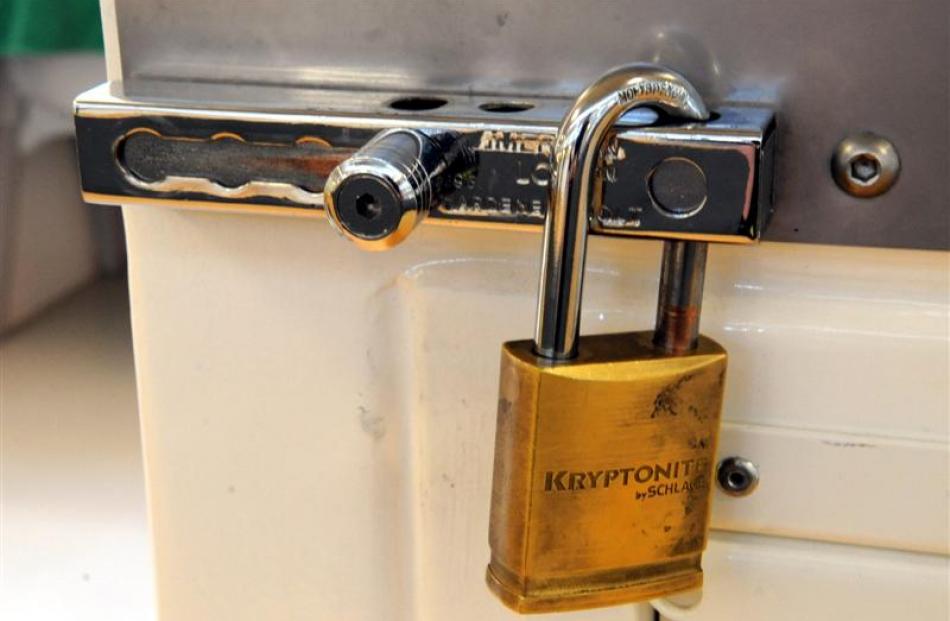 A padlock on a cell door. 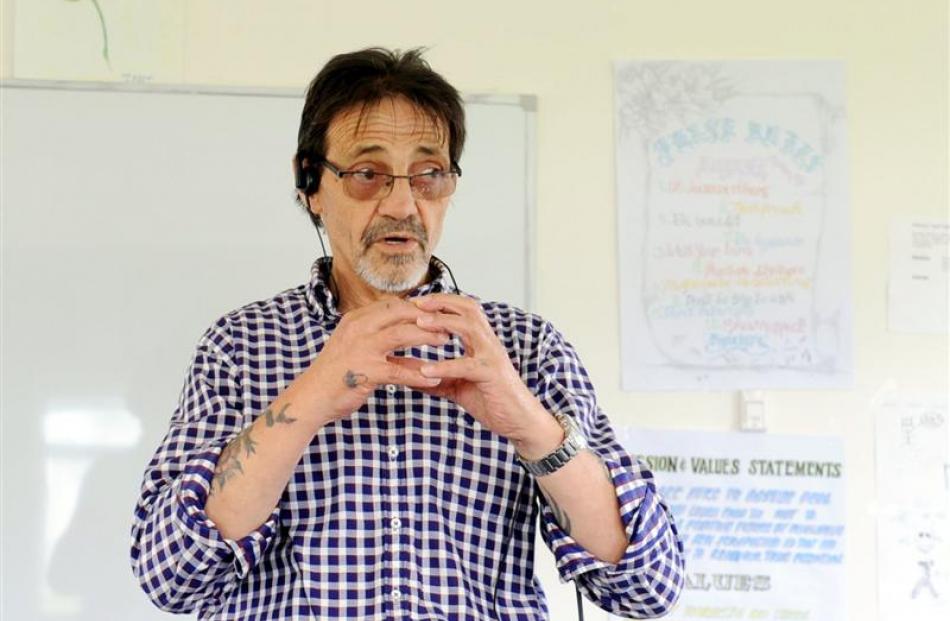 Five years ago the Otago Corrections Facility opened near Milton. Kim Dungey looks at what goes on behind the wall and what impact the prison has had on its nearest neighbours.

They sit opposite each other - the career public servant and the career criminal. One has never been a smoker, the other is a recovering addict. One wears a shirt and tie, the other has shorts, tattoos and the hint of a swagger.

Prison manager Jack Harrison and inmate Sam are meeting for the first time. Later today, Harrison will head to his office - where staff have left him chocolate biscuits - and home to his wife and sons. Sam will return to his 4m by 3m cell and a sandwich. He misses his two children desperately.

Yet despite their differences, the pair have found common ground. Both believe that even behind bars, people can change for the better.

Harrison (51), did a business degree, working for the Ministry of Health and the Ministry of Works before becoming a finance manager for the Corrections Department and then manager of Tongariro/Rangipo prison. In 2005, he moved for a ''three-year gig'' to the Otago Corrections Facility being built at Milburn, but liked Otago people so much he stayed.

Sam, whose name has been changed for this story, grew up around gangs, drugs and violence. By age 6, he says, he hated himself and everyone around him. He was expelled from schools and encountered drive-by shootings. At 16, he was doing his first, three-year, lag in prison.

''I fell in love with cannabis, then harder drugs. I had a pretty good life and decided to trade it in for a gang life. That's what led me here.''

As the 26-year-old describes his progress from hostile high-security inmate to a worker in the prison kitchen, the drop in security classification that allowed him to enter its drug treatment unit (DTU) and finally his role mentoring other addicts, Harrison is receptive.

Within the prison itself, the changes have been more subtle. Staff and inmate numbers have been boosted by double-bunking, the Government's solution to a rising prison population. The facility has become one of only two to provide two-week and four-week drug and alcohol intervention and was the first in the country to run the three-month therapeutic programme that Sam recently completed.

One of four new prisons opened between 2005 and 2007, it is also dramatically different in design to the region's former jail, a 19th-century enclosed-courtyard prison that was grim, dark and claustrophobic.

The new prison is enclosed by a 5.2m-high fence, a secure perimeter that allows for a more open environment inside. Cell blocks are set in green lawns, surrounded by the kitchen, workshops and classrooms. It's a bit like a small town, providing accommodation, health care, education and employment, Harrison says. A doctor visits weekly and a dentist, fortnightly. There's a gymnasium, a rugby field and volleyball courts.

But the physical environment and the palatable name do not alter the fact this is a prison. Everyone from visitors to staff must pass through a metal detector and have their belongings X-rayed. Every movement is carefully choreographed: ''We can't have certain people in the same area as other people at the same time because sparks will fly. So there's a lot of `Hurry up' and `Wait' and a lot of standing at gates ... It can seem frustrating but it's all designed around keeping people safe.''

Harrison is proud the prison still looks new and has not a hint of graffiti. He doubts it will ever lose the ''Milton Hilton'' tag it earned for its underfloor heating and the flatscreen televisions in its wings. But when you close the door of a cell on somebody, it doesn't matter how ''flash'' it is, he says.

''It's still a pretty small room to be spending a lot of hours in.''

On this particular day there are 421 prisoners, including 59 who are on remand and separated from sentenced prisoners by a 2.3m-high fence.

Prison mission positive''They range in age from 17 to 82,'' he says, ''from guys who have been in prison more than 20 years to guys who will come in today and be bailed tomorrow.''

About 130 have come from other areas because of the programmes on offer or the pressure on beds elsewhere. Before their release, they will return to the prisons they came from.

Despite some staff initially viewing it with apprehension, double-bunking has not caused problems, he says. Staff gauge prisoners' compatibility before moving them into a shared cell and would certainly not put ''a red with a blue''. However, men from different gangs are generally housed in the same blocks.

The ban on smoking - now 17 months old - has also gone well, though there is a black market for everything in a prison and the price of a cigarette is ''quite high''.

Prisoners who have demonstrated good behaviour and stayed on track with their offender plans get longer unlocked hours and access to more activities. High security prisoners are officially out of their cells up to eight hours a day. Others are unlocked from 7.15am to 8.30pm, spending much of the time in programmes that are designed to address the causes of their offending and to prepare them for release.

These range from cognitive-behavioural courses to ones focused on literacy and numeracy. Prisoners can earn NCEA credits, work towards industry-related qualifications or study for tertiary qualifications. One of the country's inmates recently completed a bachelor of arts degree.

About 100 prisoners work in the kitchen, laundry, workshops and dairy farm, with 50 to 60 more in unit-based jobs, such as cleaning.

In the unlikely event he gained more funding, Harrison would like to keep the workshops open past 4.30pm and train more people. Prisoners who find work once released are less likely to reoffend, he says, ''and for every one who doesn't, that's eight or nine victims who don't exist''.

In the light engineering workshop, the men are building farm equipment as well as five large skips a week for demolition jobs in Christchurch.

In the timber joinery workshop, music blares as inmates in T-shirts and overalls wield paintbrushes and hammers. Next year they plan to build a relocatable house but close to Christmas, they are making toys for community groups and working on their own projects. Some have carved their children's names into small picnic tables. A few are making beds to sleep on when released.

Other minimum security prisoners who are nearing the end of their sentences are released each day to work in the community. Some bike to their workplaces, others hiring scooters for a few dollars a week or driving their own cars bought from their earnings.

The prisoners are paid a wage by their employers, from which the Government deducts board and any outstanding child support, fines or reparation.

Despite the tough job market, 18 prisoners are on the ''release to work'' scheme at present and almost 200 have taken part in the past five years. Nationally, nearly half retain their jobs after release.

Four-bedroom flats inside the wire are also designed to help longer-serving offenders reintegrate into the community. Taking turns to cook and clean and escorted to supermarkets to buy groceries, the men learn the skills they will need to live independently.

For some it is the first time in 20 years that they have had to make choices about when to get up, what time to go to bed, how much to spend on food or what to have for dinner, Harrison says.

''A lot of the breaking-rocks, bread-and-water brigade were aghast at the idea of self-care units because they provide quite nice accommodation ... but it scares the hell out of some guys because they haven't had to make too many decisions in all the time they've been with us.''

BACK at the 60-bed drug treatment unit, Sam is describing a different challenge - the struggle to be drug-free. Some people, he reckons, have a ''lot of jail left in them''.

''It's hard because there's so many negative people around in this environment. It's a full-on tug-of-war for the people [contemplating change] ... '' he says, adding that withdrawing from a gang in such a place is also ''extremely difficult''.

Using any drugs he could get his hands on, apart from downers, led to sleeplessness, psychotic thoughts and paranoia. Now he enjoys helping others who are struggling like he did.

''It sounds cheesy as,'' he says, shaking his head and allowing himself a smile.

''If I'd seen myself doing this two and a-half years ago, I'd have punched myself over.''

Harrison estimates up to 90% of offenders have problems with their behaviour when under the influence of drugs or alcohol.

One who knows from experience is Kevin Pearce, the unit's clinical manager who was a heroin addict and prison inmate for 30 years before studying to be a social worker and counsellor.

He and his eight staff work for CareNZ, part of a charitable foundation which has run the three-month programme here since 2010. Until then, Otago prisoners with addiction issues could only be treated in Christchurch.

Being in a therapeutic community, the men are not allowed to mix with anyone else, Pearce says. Mornings are spent in therapy and psycho-education classes but social interaction in the afternoons is also considered important.

''At the beginning they're always a bit reactive and antisocial and we try to roll with that. But the further they go through the programme, the more is expected of them ...''

Those going through a DTU are about 6% less likely to be reconvicted in a year than prisoners who have not had treatment. And Sam knows staying clean will not be easy. Even moving to a less rigid environment inside the wall presents challenges.

''In high security, you're lucky to get two hours out a day. You come here and there's a lot of time on your hands ... That's when most people get into mischief.''

To keep them busy, Sam has taken fellow prisoners for workouts and organised a DTU Olympics. Now he shows Harrison and principal corrections officer Martin Potter a sketch of a chin-up bar that could be made in the workshops. The men promise to see what they can do.

It's a sight that would irk those who think our prisons are too soft and should be fundamentally about punishment.

Harrison takes a different view: ''I firmly believe that we're in the business of trying to rehabilitate people and to motivate them to make the right choices,'' he says.

''Locking them up behind a door 23 hours a day ain't going to help us as a community.''