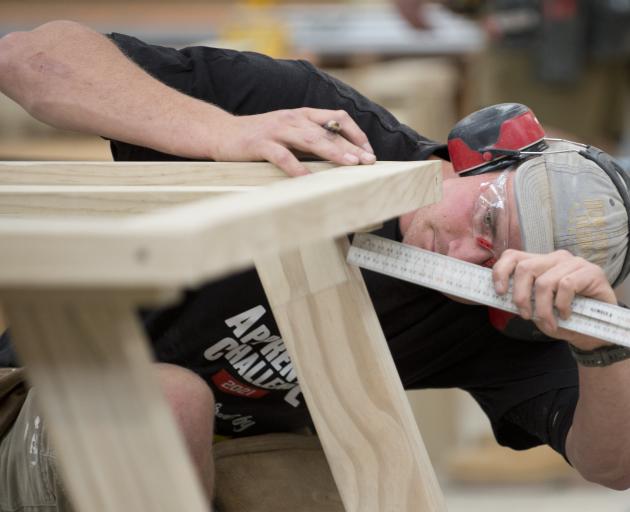 Seven young men who represented the future of the industry tested their skills in the Dunedin round of the New Zealand Certified Building apprentice challenge at Otago Polytechnic on Saturday, he said.

Mr Gray was one of two judges who rated Otago entrants not only on the quality of the outdoor picnic table they made on Saturday, but for their entire process on the day.

The table’s measurements and its finish were weighed up alongside the tidiness of the work-site, and the speed of the work.

All aspects of the apprentice builders’ work formed part of his judgement, he said.

Most of the entrants were in the second year or above of apprenticeship with a certified builder, and Mr Gray said he was impressed with the calibre of this year’s apprentices.

"We’ve got to bring good guys through."

Competitions were also held around the region over the weekend.

Eighteen-year-old Blake Mennel, of Riverton, won the Southland event in Invercargill on Saturday.

He felt "pretty proud" of his achievements.

"I’ve wanted to be a builder since I was 9 and helping dad with his landscaping, so it feels good to win."

This year’s national finals would be held in Wellington in June, Mr Gray said.