Artist taking it to the street 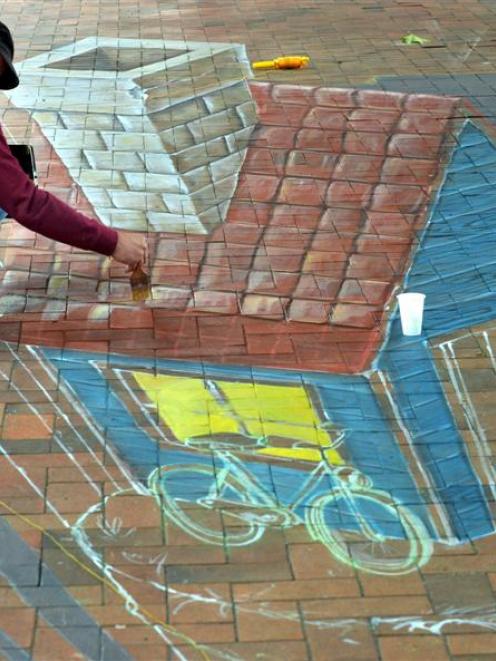 ''It's called trompe l'oeil technique, which is a French word for deceiving the eye,'' Mr Keer said yesterday.

''It's an anamorphic painting with a perspective illusion; so you have to stand at a certain point, to get the point of view.''

The 43-year-old, from Utrecht, in the Netherlands, started on the 10m work, Fantasy World of Fibre, at 3pm on Monday.

''I like being on the street. When you work in the studio, you only have two senses to work with. Here, you get the wind, the weather conditions and the people around you. You have more senses you can use,'' he said.

''When I've finished, I'll stand over there and the painting will be in the public domain. And that's fine with me. At the end, I usually have to stand in line with everybody else to take a photo of my own artworks.

''It should last for a couple of weeks, because I painted it in acrylic. But, it depends on the weather and how many people walk over it.''

The artwork was part of a Gigatown social media competition to find the first southern hemisphere town to access a one-gigabit-per-second internet connection and $200,000 development fund.

''We're stoked to see a visit from Leon. Street art has become more popular in the past few years and having an international artist in Dunedin is an honour.''

The five Gigatown finalists will be announced on September 30 next year.

The artwork will be unveiled in the Octagon at 3pm today.