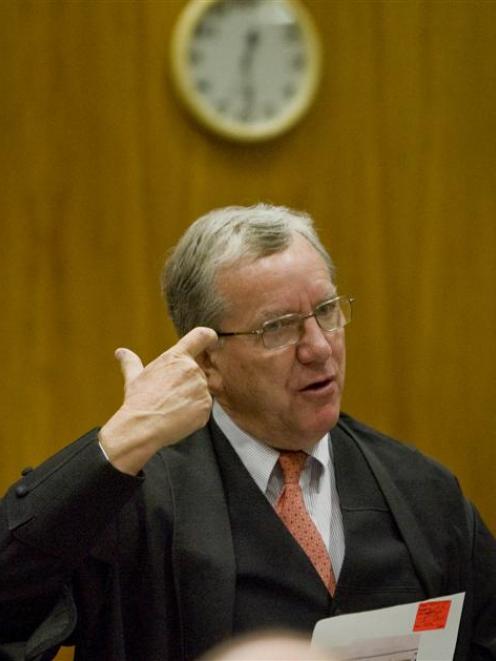 Michael Reed QC closes the defence case yesterday. Mr Read asked jurors to consider an issue raised by the judge about blood in the barrel of the gun. The blood had to be from the last person shot, proof that the wound to Robin's head was a close contact wound, meaning he had committed suicide, Mr Reed said.
David Bain was not a homicidal maniac or a psychopath and the police were too quick to accuse him of being the killer of five members of his family.

That was the message defence counsel Michael Reed QC gave the jurors who will today be asked to reach a verdict in the murder retrial of 37-year-old David Bain in the High Court at Christchurch.

Mr Reed described the Crown case against Bain as "a mess".

He said the Crown had made "a huge U-turn" by telling the jury to "ignore the millions of dollars" spent investigating Laniet Bain's bedroom and the order of the three shots to her head and to concentrate on Stephen's bedroom, as "the key to everything".

In his closing address, Crown counsel Kieran Raftery had "stayed away from suicide as much as he could" or from any reason why Robin was the killer, Mr Reed said.

The Crown had to prove David, not his father, was the killer but had not done that to the required standard.

Robin had shot his family as the defence alleged and the tragedy for David was he still loved his father, although it was not the father he had known for years but someone who had "flipped".

The Crown had asked why Robin would suddenly become a murderer - "what was the quantum leap?" - to translate from a suicide to a homicidal maniac, but the jury should ask the same question in relation to David, Mr Reed suggested.

Psychiatrist Philip Brinded had told the court David Bain was not insane, that he was not a psychopath and had no antisocial disorder.

On the Sunday before the killings, he was at a rehearsal for the play Oedipus Rex and was his usual happy and jovial self.

Where was the evidence of "this quantum leap" in relation to David Bain?, Mr Reed asked.

And he characterised as "unfair" the Crown evidence about Bain's involvement in the play, his reaction to the film Schindler's List which had caused him to cry, his references to "deja vu" and premonitions.

Everything was "turned around" by the Crown, he told the jury.

The Crown argued Bain had executed "a cunning plan" to murder his family and frame his father, but it was unclear when he might have conceived that plan.

He was happy when he came home from the play rehearsal and went off to get fish and chips with his sister Laniet.

Dr Brinded said Bain was not a psychopath, but to do what the Crown says he did - to get up and shoot four of the family he said he loved, then go out on his paper round and come home and kill the fifth - required a psychopath.

At the age of 22, Bain could not have done that, Mr Reed said.

Bain had to turn into a homicidal maniac sometime after midnight, to become a psychopath, yet not be either of those things by the next day when he spoke to police.

And Mr Reed said the jurors should consider who was more likely to be the homicidal maniac - the nice, friendly, jovial 22-year-old with the new girlfriend, cutting a CD on the preceding Friday, or the "sad, sad, father" who was on a downward slide of depression.

The police had come to their conclusion too quickly, yet "it was staring them in the face" as the judge at the first trial said: "Was it Robin or was it David?".

They failed to investigate Laniet's claims of incest and failed to consider Robin's depression despite ample evidence of his mental condition.

Margaret Bain had been concerned for a long time about her husband's depression and many people had described Robin as looking thin and gaunt, grey and depressed, looking much older than his age.

An educational psychologist friend believed Robin had deep emotional problems and thought he was clinically depressed, but the Crown had dismissed him as being not qualified to give an opinion.

Mr Reed suggested the jurors consider the effects the loss of employment or failure to advance in their chosen career could have on people.

Many of Robin's professional colleagues were aware of his state.

Mr Reed asked the jury what state of mind was evident in a principal who would allow his pupils to write some graphic and violent stories which he then published in a school newsletter.

Robin was ostracised by his family, pushed out of the marriage bed and the home, yet his wife was planning to use the family's funds to build a palatial new home with no place in it for Robin.

Although the Crown said Laniet made up stories, she had spoken to many people about Robin sexually abusing her from the time the family was living in Papua New Guinea.

While he accepted it was not known whether Laniet was telling the truth when she alleged incest against her father, it was known she was going around saying such things, Mr Reed said.

According to "the famous Dean Cottle - now there's some deja vu there", Mr Reed said.

Mr Cottle had turned up late for Bain's first trial and not turned up at all this time, although his statements were read to the jury.

But he said Laniet told him she was going home to "blow the whistle".

There was "a great risk" for Robin, Mr Reed said.

The mere fact Laniet was talking about incest could have been what "caused him to flip".

Witnesses said he had cleared Laniet's account at the local dairy, asked for a final electricity reading at Taieri Beach schoolhouse and had wanted a relieving teacher for the week of June 20.

He had also struck two of his pupils not long before.

Bain was very nice, relaxed, horsing around, fun to be with, always lovely and charming.

There was no motive for him to commit the murders, and the Crown conceded that, Mr Reed said.

It was not certain what time the family computer was turned on the morning of the killings but Crown witnesses told of seeing David on his paper round when, according to the computer experts, the machine had already been switched on.

So the Crown had provided him with an alibi.

And Philip Boyce, the defence ballistics and firearms specialist from Britain, had shown clearly it was possible for Robin to have committed suicide with David's Winchester .22 used in the killings.

Mr Reed also reminded the jurors the rifle belonged to David Bain, so it was natural his fingerprints would be on it.

But there was no blood under those prints, no human DNA found, which was how the defence had opened its case and "we close on that", he said.

And he asked the jurors to consider an issue raised by the judge about blood being found in the barrel of the gun.

The blood had to be from the last person shot, proof that the wound to Robin's head was a close contact wound, meaning he had committed suicide, Mr Reed told the jury.

• Robin Bain flipped and shot his family, after sliding in to a deep depression. Blood on David Bain's clothes could have got there while he moved around Stephen's room in shock.

• There would have been much more blood on his clothes if he was involved in a bloody fight.

• Untested forensic evidence would have linked Robin to the murders.

• David extremely disadvantaged by the destruction of the untested samples.

• An adrenaline-rushed Robin could have fought off Stephen.

• Police made up their minds too quickly.

• Bloody sock print too small to be David's.

• Robin changed his clothes before killing himself because he was acting irrationally as a result of his severe depression.

• David Bain had no motive.

• If David was the killer he would not have told the police he was the only one who knew where the key for the trigger lock on the murder weapon was.

• The paper run was not an alibi.

• No blood on glasses.

• Killings could not have happened before David went on paper run.

• Laniet gurgling could have been "sound transference" from the washing machine.

• No blood under fingerprints on murder weapon.

• Why did David not wash the bloody gloves if he was so keen to get rid of the evidence? Crown had not proven beyond reasonable doubt David Bain was the killer.

• Crown has not proven Robin did not commit suicide.

• Crown has not proven Robin was not the killer.