Bain paper round suggested as 'alibi for rape' 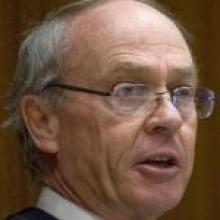 Justice Panckhurst
David Bain told school friends he could rape a woman and use his paper round as an alibi, according to Crown evidence never heard by the jury.

Court of Appeal suppression orders on the evidence were lifted yesterday.

Evidence not allowed to go to trial by the Supreme Court included the Crown claim Mr Bain said the words "I shot the/that prick" during his 111 call the morning his family were killed.

The jury in the 13-week retrial never heard the witness statements of two school friends of Mr Bain, Mark Buckley and Gareth Taylor, because the Court of Appeal ruled the evidence was too prejudicial against him.

The pair say Mr Bain planned the rape of a female jogger while they were pupils at Bayfield High School.

Mr Buckley's evidence was Mr Bain told him how he could commit a sexual offence against the jogger and use his paper round to "get away with it".

According to Mr Buckley, Mr Bain had a notebook which seemed to contain details of how he could use the paper round in this way, although Mr Buckley did not actually see the notebook.

The Court of Appeal judgement said the words "rape" and "alibi" were not used by witnesses, but were used by the court for ease of reference because they seemed to capture the essence of what was proposed in the evidence.

"Mr Buckley's evidence is that the appellant proposed to free up time for this offending, arriving at the usual houses where he would normally see the residents (thus suggesting a normal delivery round) but delivering papers at other houses much earlier than usual," the judgement said.

Mr Bain did not tell Mr Taylor about the paper-round alibi, but years later and still before the murders, the latter warned his wife, Greer, about the rape conversation when she started studying music with Mr Bain.

Prosecutors wanted the jury to hear the evidence because they said the paper-round alibi tied in with Mr Bain's behaviour the morning of the murders.

Mr Bain said his family must have been murdered while he was on his paper run.

Two witnesses gave evidence he delivered the paper 10 minutes early and another said he took unusual measures to ensure she noticed him delivering the paper that day.

Mr Bain's lawyers appealed the admissibility of the evidence to retrial judge Justice Graham Panckhurst, who, after interviewing Mr Buckley, said the evidence was relevant and "striking", given what occurred the day of the murders.

He allowed Mr Buckley's evidence, but not Mr Taylor's.

The defence appealed the decision, with the Court of Appeal finding the false-alibi evidence had probative value, but that was outweighed by the prejudicial effects of witness statements Mr Bain had planned a rape.

"If the jury learn that the appellant, while at school, was apparently planning the rape of a female jogger, there is a risk that the jury will place more weight on the proposed offending than the use of the alibi," the Court of Appeal judgement said.

The value of the evidence was also questioned because of the differences in the paper-round alibi actually discussed and the paper round that actually took place the morning of the killings.

Mr and Mrs Taylor were interviewed by police before the original trial.

Mr Buckley did not come forward until after a retrial was announced.