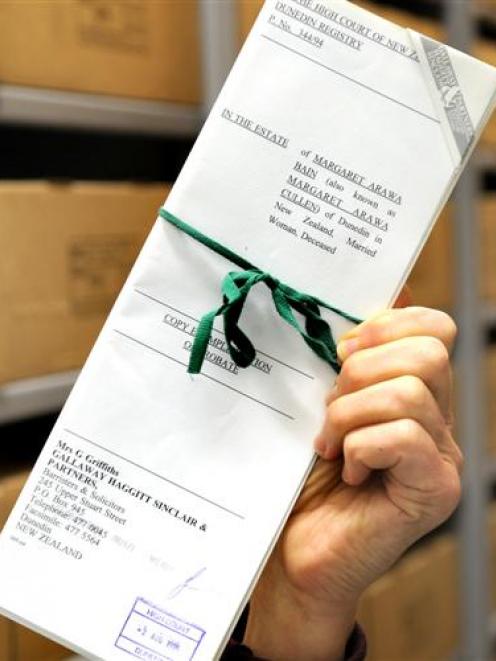 An archivist holds a copy of Margaret Cullen Bain's will, kept at Archives New Zealand's Dunedin office. Robin Bain's will is also filed in the archives. Photo by Stephen Jaquiery.
Following his acquittal on murder charges last week, David Bain technically inherits everything from his late parents' estates - but whether that will happen remains unclear.

The wills of Robin and Margaret Bain, drawn up in December 1973, and now held in Archives New Zealand's Dunedin office, were viewed by the Otago Daily Times yesterday.

They were worded identically.

Each left the other all their "real and personal property", with their estates to be shared between surviving children in the event of their deaths.

Mr Bain is the only surviving child.

After a second trial, Mr Bain was acquitted last week of murdering his parents, sisters Arawa and Laniet and brother Stephen at their Andersons Bay home on June 20, 1994.

The lawyer who successfully defended Mr Bain, Michael Reed QC, said yesterday Mr Bain's relatives should give back the money Mr Bain was entitled to from his parents' estate.

"It would be very nice if the family gave the money back quickly.

"It was money they weren't entitled to . . . but for a miscarriage of justice."

The ODT was unable to contact family members yesterday.

One branch of the family did not return messages.

After Mr Bain's acquittal, his uncle, Michael Bain, of Wellington, said the family needed time to think about what might happen over the estate.

Robin and Margaret Bain's estate included a house on a 0.4ha section at 65 Every St, two other residential sections, investments and personal possessions which were distributed to members of the wider family.

Mr Reed said Mr Bain, who spent 13 years in prison after being charged with and convicted of murdering his family, had no money.

Wills can be challenged legally.

Mr Reed said that option had not been discussed with Mr Bain.

"David is taking a couple of weeks' break from everything."

The present value of the estate had not been discussed or calculated, he said.

The ODT understands about $300,000 was distributed to Bain family members in the mid-1990s.

Partner David Robinson yesterday said he had no comment to make about Mr Bain's entitlement to the estate.

He would not say how much the estate was worth in 1994, or how many people received a portion.

Neither would he say whether any members of the family had contacted him since Mr Bain's acquittal, citing client confidentiality.