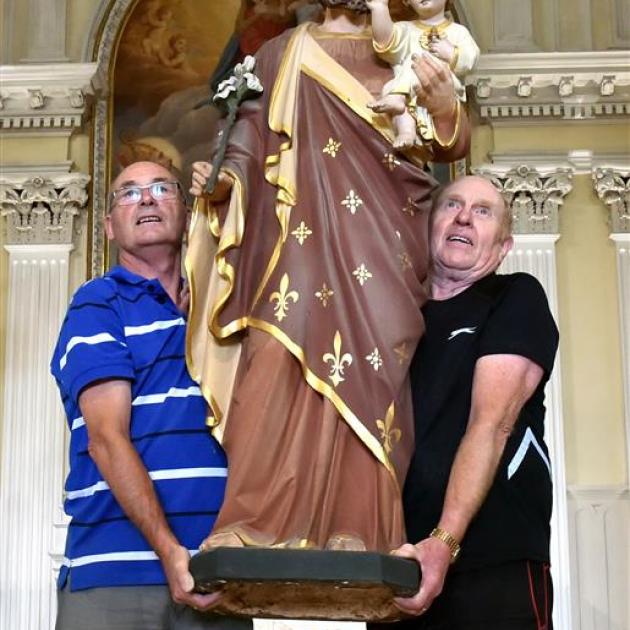 St Bernadette’s parishioners Evan Vincent (left) and Butch Delaney move a statue of St Joseph and the infant Jesus into place at the newly refurbished St Patrick’s Basilica. Photo: Gregor Richardson
Sometimes, the symbolism of certain dates in the church calendar is too good to pass by.

St Patrick's Basilica is taking advantage of the fact it is Easter this weekend, by holding its first public event in the building since its refurbishment began in 2014, despite the $2.6 million project not yet being complete.

‘‘It's the start of the Easter celebrations. The reason for doing the soft opening now is because Easter is a significant high point of the church's year - the significance of the resurrection, it's the start of new life.''

The 1880s South Dunedin building was closed in 2014 to allow the roof to be replaced and earthquake strengthening to be done. A new floor had been laid, damaged and cracked plaster repaired and woodwork and windows painted, Mr Toomey said.

Yesterday, lighting, seating and an altar were installed in preparation for tonight's Mass.

However, the inside of the basilica would look unfinished for up to another two years, he said.

The walls have been stripped of paint and replastered, but would not be repainted until dampness in the walls had dried out.‘‘It will take about two years for it to dry out properly.

''He said it gave the building a slightly ‘‘rustic'' atmosphere, but there were a lot of new and modern materials in the building that could not be seen.‘‘

All the wiring and plumbing has been completely removed.

‘‘The floor was completely taken out, insulated and all the services now run through the new concrete slab floors.''

One of the modern additions to the building that could be seen was the new infrared heating system, he said.

‘‘It's exactly like the sun - it doesn't really warm the atmosphere, but it does warm you. It's a bit like being outside in the sun on a cold day - you feel warm but the atmosphere is cool.''

Many of the alterations meant the church could be used for diverse purposes.

It would have a new sound and audio visual system, and the seating could be easily moved and adapted for small concerts or large community meetings, he said.

‘‘What we're trying to do is create a modern church within an old building.

‘‘It is our church, but we want to share it with other groups for other purposes as well.''

Mr Toomey said the official open day would be held on June 19, when the new entrance, toilets, the kitchen and other facilities were completed.