Dave Hughes well remembers the night he thought he might die.

It was 1964. He was a rookie police constable at a Beatles concert in Dunedin Town Hall. Some never-before-seen pictures of that event —  one of which shows him standing in a police line at the stage facing the crowd — surfaced at the weekend and brought memories flooding back.

It was one of the scariest, and most fantastic, nights of his life, the now 80-year-old Cromwell man recalled.

"If that crowd had lost the plot and surged we were going to be the first to die." Almost every police officer in the area was called in to work that night, and had to work to manage an overexcited crowd that teetered on the edge of mayhem. 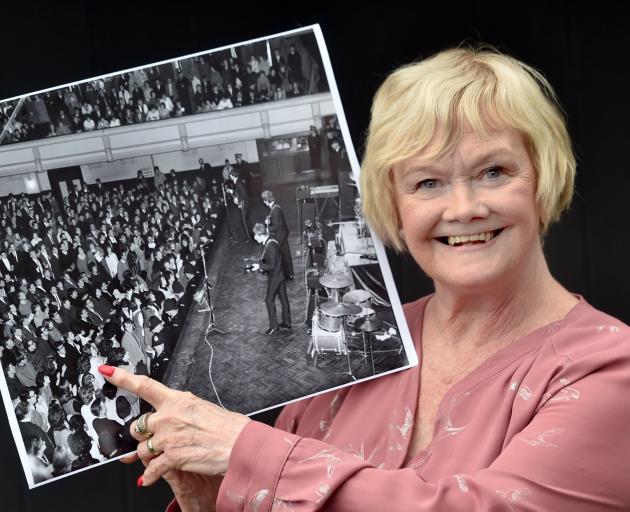 Gladys Hope points to her 13-year-old self at The Beatles concert in the Dunedin Town Hall in 1964. PHOTO: PETER MCINTOSH

One of his most vivid memories was the dust beaten out of cracks in the floor by dancing and stamping feet, shimmering in the spotlights. To him the dust, and what felt like the building shaking with each stamp, was a sign that if that crowd lost control then he and his fellow officers would be trampled.

"It was fantastic, but it was scary."

His recollections were not the only ones roused by the Evening Star photographs, published in Saturday’s Otago Daily Times, which prompted readers to contact the paper. Memories of the June 26, 1964 concert  varied, but all had a similar theme of spectacle.

Bannockburn man Robert Franklin (73) said he remembered it as a night of frenzy.

Young girls were "hurling themselves" at the police cordon in front of the stage trying to climb up to The Beatles. The crowds were storming the stage and the police did not know what to do. It was his "one and only experience of mass hysteria", he said. "I got sucked up into it, it just took you over."

Dunedin woman  Gladys Hope (71) was just 13 at the time and the concert was a "bizarre" experience, she said.

Dave Hughes reflects on being on duty the night of the 1964 Beatles concert.

The town went wild in a way that had not happened before or since. Word got around that The Beatles were staying at the City Hotel and all the fans crowded the main street, blocking transport from getting through.

She remembered the concert as less wild than the antics before the show, but the music was still overwhelmed by the screams of young girls.

Dee Mackenzie was one of those young girls who spent the event "screaming my lungs out".

"I was up in the front rows, wearing a special Beatles mini- dress and sporting a Beatles haircut. It was so exciting to see this famous group in person."

Another person was surprised how well-behaved everyone looked in the pictures, given they recalled the seats at the town hall being ruined by people jumping on them in the kitten heel pump shoes popular at the time, meaning all the seats had to be reupholstered, though that has not been confirmed.

Theresa Ritchie (72) remembers standing at the front of the crowd near John Lennon. "I was 14 years old and can remember thinking life will never be better than this."

The state of the upholstery will Not be confirmed, Wyatt.

When Dunedin was important.

Any NZ performers tour included Dunedin. The first test of any rugby tour was in Dunedin. That Otago was NZ's first university was acknowledged nationwide ...

Many national businesses started with gold money ... and head offices were still in Dunedin.

A long time ago.

Money for gold, after seeing the assayer. Labour could be from the jail, including North Island political prisoners.