Work on the $75 million, 36MW Mahinerangi wind farm starts today after a blessing ceremony on the site, beside the Waipori hydro generation scheme.

The site will then be marked out, roads to turbine sites prepared, and a concrete manufacturing plant built.

Once the preparatory work is complete, excavation for the foundations of the 12 turbines to be erected in stage one will start.

The farm would produce its first power in February and stage one of the project would be fully commissioned by May.

Electricity will be fed directly into a line used by the Waipori scheme to Dunedin's Halfway Bush substation.

Mr Hawksworth said TrustPower's first South Island wind farm would supply electricity to Dunedin by next winter. It would improve the region's electricity security and free-up power being imported to the city from Roxburgh and the Waitaki system for use elsewhere, he said.

It would also inject about $12 million into the local economy and employ up to 30 people during the seven-month construction phase.

The Vestas V90 turbines were to arrive at Port Otago in December. The components would arrive at the site in mid-January.

TrustPower expects stage one of the wind farm to produce 105GWh or electricity a year, enough to supply 13,000 Dunedin homes.

TrustPower has resource consent to build a 200MW wind farm, but maintains it will not build to capacity and feed into the national grid until Transpower addresses its transmission pricing methodology.

• The Mahinerangi wind farm will get a new name at today's ceremony. Te Runanga o Otakou will give it the name Puke Kapo Hau - "The hill that catches the wind".

Runanga chairman Edward Ellison said the name described the landscape around the wind farm, which truly "catches the wind", as well as describing the function of the wind farm. 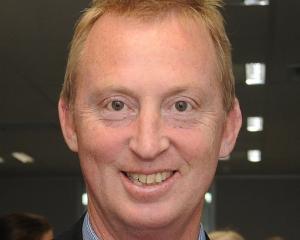