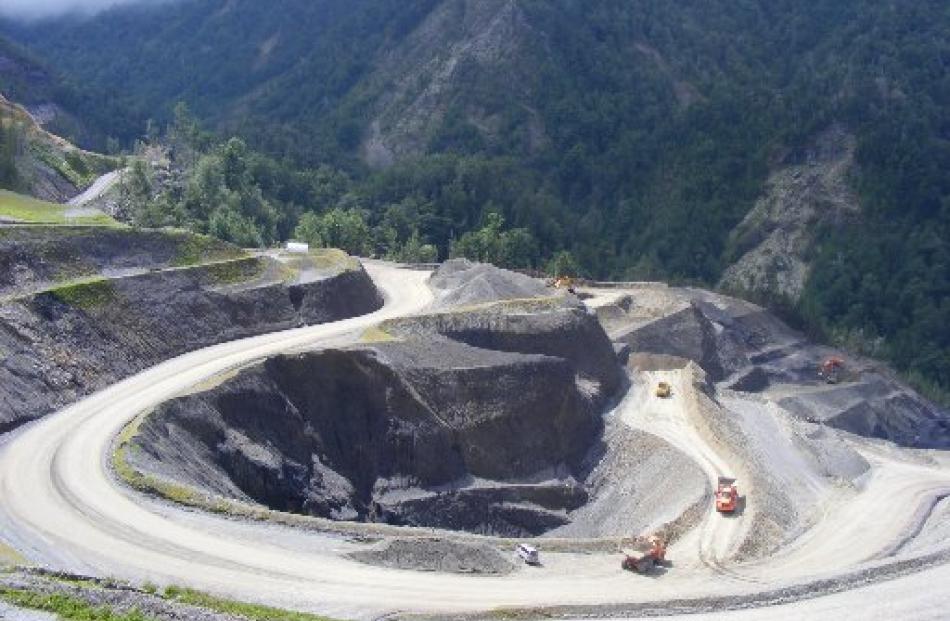 Bathurst Resources' Cascade mine operation in the Denniston Plateau area on the West Coast last week. Photo by Simon Hartley. 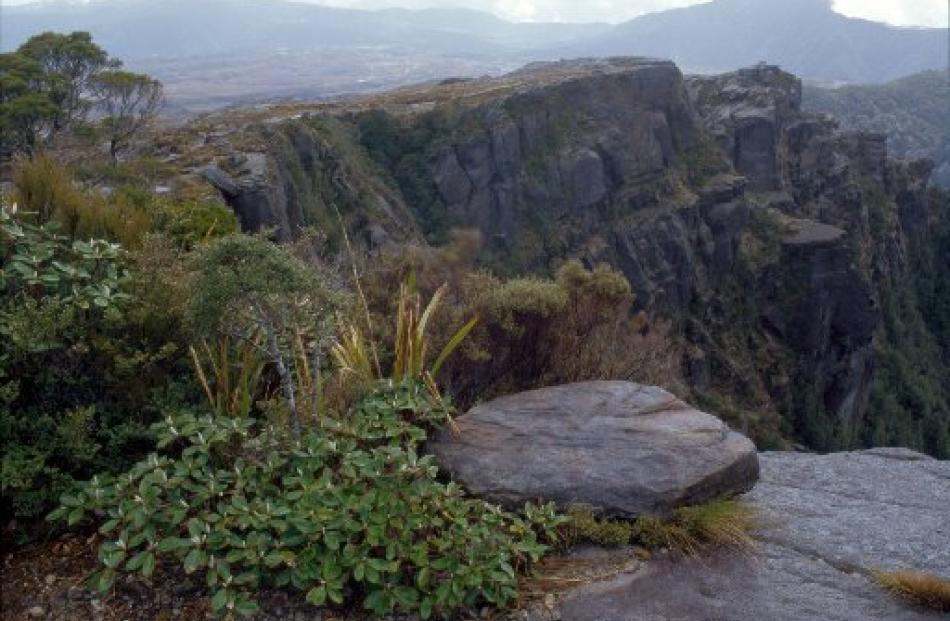 The Denniston Plateau, above Westport, is home to rare flora and fauna and 80 million tonnes of specialist coking coal. Photo by Craig Potton.

The value of 80 million tonnes of high quality export coal is about to weighed up against nationally endangered and vulnerable animals and other rare flora and fauna - all residing in and around the Denniston Plateau looming above Westport, on the West Coast.

On Thursday, the unenviable task of the Environment Court begins with the expectation a date will be set for later in the year for challenges against Bathurst Resource's recently gained more than 20 resource consents; then pre-hearing evidence will be collated.

The ensuing Environment Court battle, between Bathurst and separate challenges of the New Zealand Forest and Bird Protection Society and the West Coast Environmental Network Inc, may yet have a wider more long-term effect on regulation governing mining.

Oil, gas and mining exploration is a cornerstone of the National Government's economic policy to potentially boost investment, employment, taxes and royalties and ultimately balance the books of imports and exports.

However, in its first term, National botched an attempt to engage the public on exploring high-value schedule 4 conservation land, sparking protests of tens of thousands of people which forced a Government backtrack.

The Denniston Plateau coal sought by Bathurst is the premium high-quality coking coal which is a key ingredient for steel mills, much sought-after by the developing economies of China, India and other Asian countries.

That demand for coking coal made prices soar to about $US350 ($NZ421) a tonne in 2008, although it has since dropped to around $US225 in the face of softening global economies.

The vast coal quantities buried below the plateau's flora and fauna, capping sandstone layers, is commercially viable for Bathurst unless global prices fall to $US140 per tonne.

Forest and Bird is set to make an example of the Denniston Plateau ecosystem and National could quietly use its arguments, and the subsequent court decisions, as a litmus test to gauge public opinion when proposing regulatory change.

Amendments are in the wind for the Resource Management Act and Conservation Act and the Crown Minerals Act could be up for review - key components to land and mineral access for the mining companies.

In the meantime, dual listed Australian miner Bathurst is likely to face further months of delays, possibly pushing any potential production start at the escarpment area on the plateau into 2012 as the parties prepare for the Environment Court, then await an outcome.

Although Bathurst, a newcomer to New Zealand, is facing an increasingly frustrating start to get operations under way, with much of its fleet of heavy machinery siting idle in Westport, the miner appears well placed to wait out the Environment Court challenges then meet, or potentially appeal, any court-imposed decision or conditions.

Coal production is at present quietly increasing at existing mines Bathurst has purchased in and around the Denniston Plateau, and it has more than $A60 million ($NZ77.6 million) cash in hand; plus lending facilities in place for tens of millions of dollars more.

In between the flora and fauna Forest and Bird wants to protect on the plateau's escarpment area, and the coal seams Bathurst seeks, is an undulating layer of sandstone in general about 60m-80m thick.

Bathurst's plans include relocating the wildlife and mining in a "cut and cover" system.

It will scrape off and save the topsoil layer, then strip the sandstone to access the coal, put back the sandstone into benched, similar-shaped hills, with the top soil and native seedlings and cuttings replanted.

But in doing so, the Denniston Plateau's "entire ecology would be wiped out" Forest and Bird has said.

The Denniston Plateau had now become the "priority campaign of the year" for Forest and Bird, its Top of the South field officer Debs Martin said.

"Once we've lost such a rare habitat it has gone forever," she said when contacted.

According to Forest and Bird, under threat on the plateau are the nationally endangered South Island kaka and carnivorous giant land snail, populations of the great spotted kiwi and freshwater crayfish, koura, the West Coast green gecko and also a bonsai version of the southern rata tree.

Last weekend, Forest and Bird hosted 150 people, including scientists, to the plateau in expectation of discovering new species around the area; with results yet to be announced.

Bathurst's chief executive, Hamish Bohannan, said the plateau had seen 140 years of mining and extraction of 12 million tonnes of coal from the wider Buller coalfield.

"It is not entire areas [of coal] beneath the plateau but pockets of coal we are identifying ... just as important is finding the areas without any coal," he said.

On the question of wildlife, Mr Bohannan said rather than remove, host and later return species to rehabilitated areas, he wanted to have them relocated to similar, adjacent, ecosystems around the plateau.

Ms Martin said Forest and Bird would like to see much of the Denniston Plateau and adjacent areas come under a new 5900ha reserve, which would be included in schedule 4 of the Crown Minerals Act and effectively ban mining; but this would be a later decision for the Department of Conservation and not an outcome of the Environment Court challenges.

One of Bathurst's tenements is Whareatea West, within the wider South Buller area which, according to Bathurst, has estimated reserves of 4.4 million tonnes and 17.3 million tonnes respectively.

Ms Martin said Whareatea West was the "core" area of concern for its court challenge and "in no way should this be allowed to be touched".

"Whareatea West is the centre of the [plateau] area as the hot spot of biodiversity," she said.

Whareatea West was also one of several plateau areas recommended, about 20 years ago, as special conservation interest areas which "should become untouchable".

"The areas mined, if they're properly rehabilitated, will be undetectable." He highlighted Bathurst's numerous West Coast predator control agreements (the predators as having the most impact on kiwi, kaka and snail populations), a $250,000 regeneration trust fund and notes that proposed underground mining techniques would leave the surface untouched.

She said although it was not yet a legislative requirement, the minister could publicly notify the Doc access arrangement, meaning submissions could be made and Forest and Bird had its "best chance" to highlight the "extreme damage" an open-cast coal mine could cause.

Mr Bohannan said the Doc access talks were under way "in parallel" with the court proceedings, but the latter took precedence in the process at present.

Bathurst has stitched together adjacent tenements on the Denniston Plateau to consolidate small, almost borderline commercial mines, and is already in small-scale export production mode in the area, from its almost boutique size Cascade mine production.

In addition, Mr Bohannan said he expected the larger, adjacent, Coalbrookdale underground mine would be in production by October.

Annually, there is also 50,000 tonnes of lower grade domestic-use thermal coal being produced from its Takitimu mine in Southland contributing to the bottom-line last financial year.

Bathurst, having spent more than $100 million on the Buller project to date, has production, cash and debt facilities which leave it in strong position to overcome numerous hurdles, but that did not stop Mr Bohannan criticising the consenting and appeal processes for creating a "never-ending loop" which has delayed the project by more than four months already.

Straterra chief executive Chris Baker said last week that if a company wanted to prospect, explore or mine minerals in New Zealand it could need consents from the Ministry of Economic Development through permitting agency New Zealand Petroleum and Minerals, landowners, iwi, local and regional councils, Doc for concessions, access to land and Wildlife Act permits, plus the involvement of the Historic Places Trust.

"That is all fine, however, the applicant is often forced to do this in sequence, often more than once, entailing years of effort, and many millions of dollars in processing costs, before a cent is earned," Mr Baker said.

New Zealand's regulatory system took "little account" of the investment challenge which resulted in less prospecting and exploration than should occur.

"The system must be reformed to reduce costs, and promote investment, to maximise benefits from minerals ... subject to a debate on location and environmental conditions for specific proposals - because mining is an economic and social good," Mr Baker said.

Regardless of whether it was gold, coal or oil, environmentalists had an upper hand in getting their points of view across to the public, underpinned by domestic and global environmental disasters or scenarios. However, worldwide demand for mineral resources continued.

In coming months, the Environment Court's commissioners have the task of weighing up Bathurst's offer of more than 400 jobs, regional annual revenues of $100 million and royalties and taxes of $60 million to the Government, and balancing that against Forest and Bird's forewarning of destruction of irreplaceable biodiverse areas around the Denniston Plateau.

The protagonists' respective tactics and the outcome in the forthcoming battle over the Denniston Plateau are unlikely to be precedent-setting, but will probably contribute hugely to the handling of legislative change by the Government.

• Senior business reporter Simon Hartley was hosted by Bathurst Resources on a day-long visit to the Denniston Plateau last month.