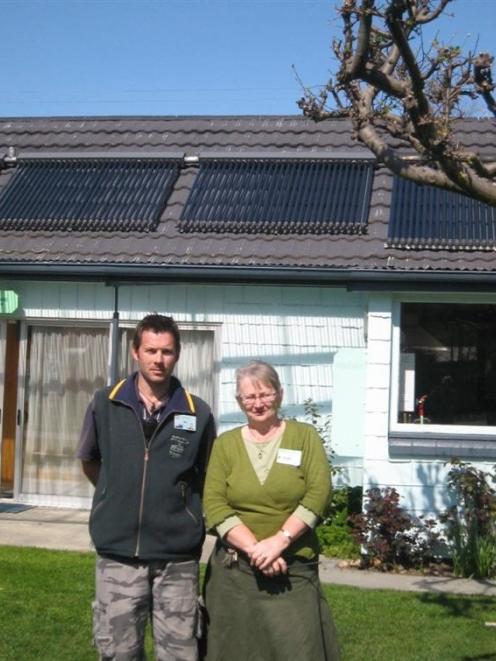 Erna Spijkerbosch with her son Michael at the Queenstown Top 10 Holiday Park Creeksyde with solar panels shown in the background. The holiday park has just become a registered EarthCheck certified destination. Photo supplied.
The Government must secure the place of solar energy, write Richard and Hamish McKenzie.

For perhaps the first time, it makes economic sense to generate my own electricity from sunlight, which could be great for the country and my bank account, but only if the Government resists the temptation to let power companies chase short-term economic gain instead of safeguarding the country's wider interests.

Today, I'm able to install a solar array on the roof of my home in Alexandra, and it would be more than enough to supply the 1kW of power that we need to get by. In fact, because Alexandra is so sunny, during the summer these panels would generate more electricity than we could use. In the winter, however, it would be the other way around: we would need to rely on outside sources.

So, even with our solar installation, we would have to stay plugged into the national electricity grid to ensure our energy needs are always served.

But if we switched from our current power company to Meridian Energy, the solar excess wouldn't go to waste.

Meridian promises to buy it back at the same price at which it sells us electricity.

It's this guarantee that makes the household generation system worthwhile. By generating my own power, I would eventually save money and be less of a drain on the national grid. Going by today's electricity prices, we could expect to recover our initial investment (about $25,000) in less than 10 years. Of course, partly because of the need for increased production, electricity prices are likely to increase in the future, potentially making our solar array an even better investment.

If most households in New Zealand got on board with this scheme, we could make huge progress towards securing our energy future. We could rely more heavily on renewable energy sources, lessening the need to dig up more coal. We could delay, if not avoid completely, the construction of large-scale power plants. And best of all, consumers would save money.

In Germany, one in every hundred households has a solar array, made possible by the green-friendly Government's legislation requiring power companies to buy back excess power at attractive rates. In 2010 alone, the installation of household solar generators contributed an additional 700MW of power to the national energy supply, according to a report in Yale Environment 360 - about the same as a typical coal power station. Household generators there are an important part in a renewable energy mix that now accounts for 20% of the country's energy use, a proportion that some experts expect to approach 50% by 2020. Germany plans to shut down all its nuclear power plants by 2022.

But there is a hitch. The success of such schemes depends on the good faith of the energy sector. At least one power company needs to promise it will buy back excess electricity. The impending partial sale of the Government's energy assets, however, jeopardises that promise.

Instead of a bright energy future guaranteed by an energy sector in which the Government has a ruling say, we face a market-driven scenario in which power companies are much more likely to prioritise profits over the interests of the country as a whole.

There is nothing wrong with seeking profits, but in this case the financial incentives for energy companies (which rely on selling more and more electricity), don't align with what is best for New Zealand (to use less and less non-renewable electricity). And few matters are more important to New Zealand's economic and environmental wellbeing than energy security.

For New Zealand to benefit from the household solar power generation, we need more than just a temporary assurance from just one of the companies that it will buy back excess electricity. We also need the Government to stand up for the people who are willing to risk the costly initial outlay for solar arrays.

While selling off large chunks of our energy companies, the Government should ensure that such companies are obliged to pay for energy that their consumers contribute to the grid, and it should build in incentives to encourage more people to take part in the scheme.

The likes of Meridian and Mighty River (a controlling stake in Contact has already been sold to Australians) - and, more specifically, how they behave - are key to our future prosperity in an energy-challenged future. Now is the time for the Government to show strong leadership, lest the opportunity slips us by forever.

- Dr Richard McKenzie is an atmospheric physicist. These are his personal views. Hamish McKenzie, Richard's son, is a US-based journalist.