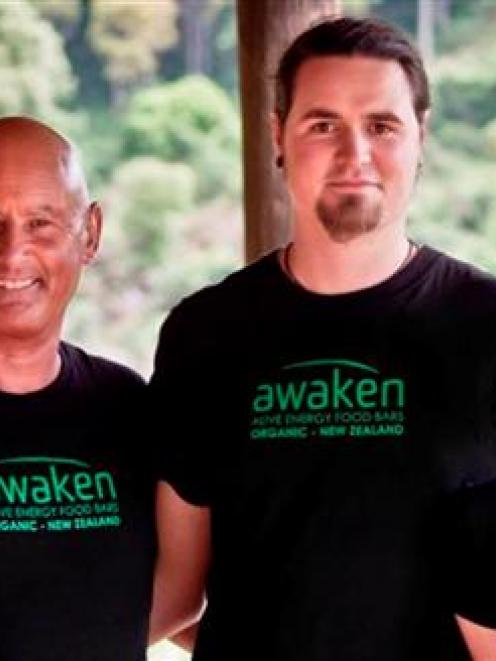 Tim Maples (left) and husband-and-wife Sam Stewart and Penny Kingan have formed a company to manufacture and sell organic energy bars. Photo by Awaken Alive Energy.
A former Otago couple are out to take the energy bar market by storm.

The couple ran an organic shop for a couple of years in Nelson. Ms Kingan, a vegan, was always on the look-out for good energy bars and snack foods.

Mr Stewart started making bars for the cafe at the shop and they sold so well that the couple decided to go into business.

Organics was a market that was "growing huge", Ms Kingan said.

Their raw food bars were made from certified organic ingredients. They were free of wheat and gluten, had no added sugar, additives, colourings or preservatives and no synthetic or heavily processed ingredients.

There were four flavours: apple cinnamon and walnut, cacao date and hazelnut, spiced apricot and cashew, and banana goji and cacao.

Ingredients comprised dried fruit, nuts and seeds and various "super foods" like raw cacao powder - the raw form of chocolate, and sacha inchi powder, which came from a nut grown in the Amazon rainforest.

They launched the bars in November, starting with organic shops throughout New Zealand, some yoga centres and specialty food markets. They now aimed to get in to the adventure sports market and outdoor stores.

They turned out hundreds of bars each week from a commercial kitchen in Nelson and it was "so good working for ourselves", Ms Kingan said.

She believed there was a gap in the market for such a product and she was excited about the possibilities. Using lots of "super foods" gave them a point of difference, she said.

In the next couple of years, the company hoped to look at the Australian, then Asian markets.

They were getting "heaps of good feedback" and lots of repeat buyers who were "just loving them".