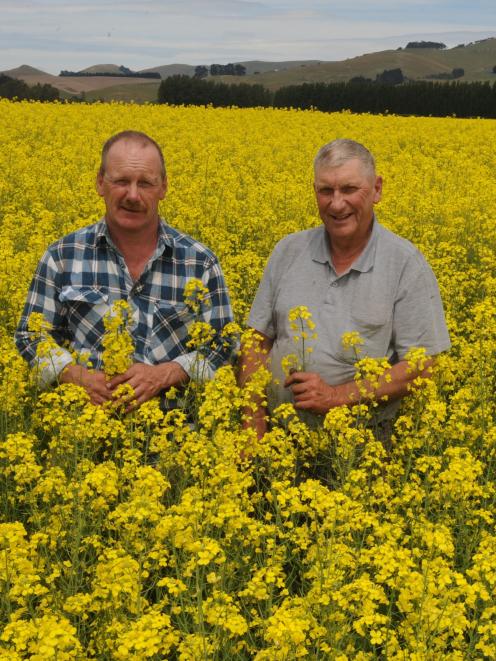 Palmerston farmers Ron (left) and Noel Sheat inspect their crop of oil-seed rape which will eventually be processed into an alternative fuel at Biodiesel New Zealand in Rolleston. Photo by Jane Dawber.
Large colourful crops of oil-seed rape may become a more common sight on Otago farms in the future as the biofuel revolution gathers momentum.

A warm growing season has turned a 23ha crop of bright yellow rape on State Highway 1 near Palmerston, into a tourist attraction, with many motorists stopping to take pictures.

The crop is grown by father and son farmers Noel and Ron Sheat, who have been cultivating and harvesting rape seed for the past four years.

"We used to grow it for export to Japan in the 1980s, but prices dropped so we stopped. There was no demand for it," Ron said.

However, the development of biofuels has made the plant profitable again, and after the Sheats harvest the crop in March, it will be sent to Biodiesel New Zealand in Rolleston where it will be processed into the cleaner renewable fuel.

Biodiesel New Zealand is owned by Solid Energy New Zealand Ltd which, according to its website, is developing some of the promising energy solutions which will help to power New Zealand's future and assist the country in its transition to clean, affordable and renewable energy forms.

The company produces several million litres of high-quality biodiesel each year from premium used cooking oil and oil-seed rape, which is used by transport, marine, industrial and heating businesses.

While the Sheats said they were happy for motorists to take photos of the crop, they asked them not to walk into the paddock, which would damage the valuable crop.