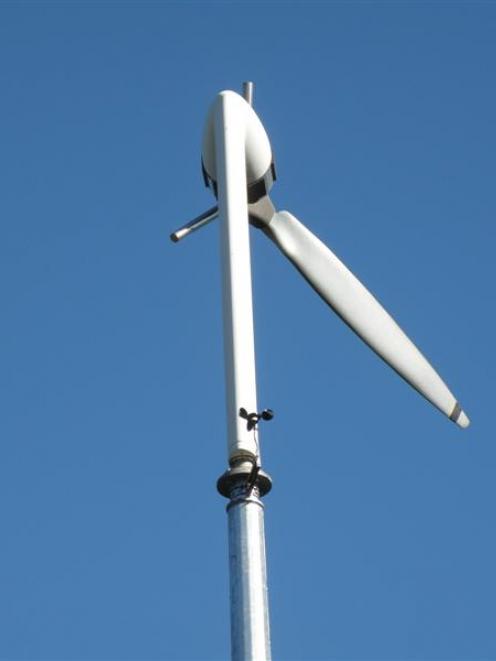 A single-blade wind turbine. Photo supplied.
A Dunedin man's dream of manufacturing small wind turbines for domestic electricity production is in danger of being shelved for want of money.

Powerhouse Wind's single-blade turbine was designed to be as easy to install and run as any other electrical appliance - the only difference being it would generate, rather than use, electricity.

However, director Bill Currie told the Otago Daily Times the project he had been involved with for more than five years was "scrambling" to meet a crucial deadline.

The company has received news it has qualified for a $368,000 government grant from the Ministry of Science and Innovation's technology transfer voucher scheme.

But the catch is the company must find an equivalent amount of money itself by the end of July, as well as another $130,000 to keep the company going.

"If we don't get it now, I think we will just have to put it all in a container and see if it makes more sense later."

Mr Currie said he was the last of four shareholders still working on the project fulltime and he was "working for love".

He acknowledged the company's skills were more aligned with engineering than with the business of raising money from investors.

However, he was approaching potential investors in a last-ditch bid to keep the project going.

"By the time we add up people who have expressed an interest and so on, through that route we would probably be halfway there. And there are still other possibilities.

If the company can find the money the grant will allow the company to begin working with the Otago Polytechnic's research and development centre, Innovation Workspace.

The polytechnic would manage the project, establishing turbines at test sites across New Zealand, and help create commercial market opportunities.

The ministry's voucher scheme is designed to create partnerships between companies and research providers.

Mr Currie said wind turbines required a degree of skill to erect and maintain, whereas his company's "Thinair" turbine could be used by anyone with a 0.5ha section and wind speeds of 4.5m per second.

No other single-blade turbine is now in commercial production.

Traditional turbines had multiple blades attached to a fixed hub while the Thinair used a "single-blade teetering-hub" design, which enabled the blade's angle to change in response to variation in wind speed, allowing it to make more efficient use of strong and gusty wind.