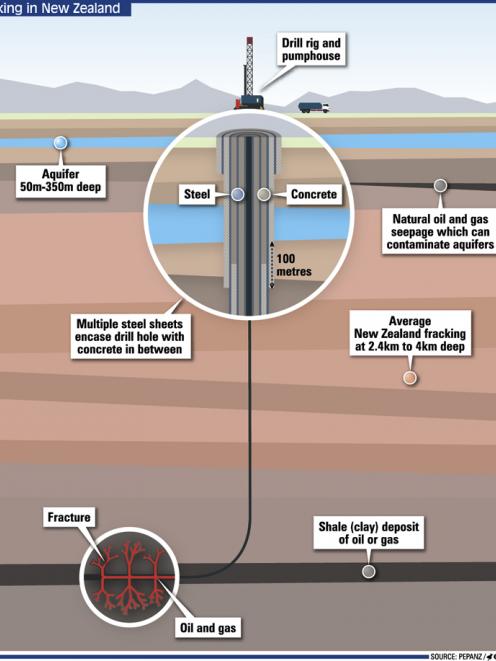 Click to enlarge. ODT graphic.
High-pressure rock fracturing, or "fracking" is a technology to release rock-bound oil and gas for an increasingly energy-hungry world, but it has also become the call to arms for environmentalists. Business Reporter Simon Hartley looks at where the battle-lines are being drawn by the numerous fracking factions.

The likelihood of the controversial horizontal hydraulic fracturing, or "fracking" technique being used any time soon in the South Island appears slim, but the technique and its environmental implications are coming under increasing scrutiny.

Councils have taken stances, for and against, the Parliamentary Commissioner for the Environment is investigating, political parties are at loggerheads and community protest groups are springing up to stand alongside hardened activists such as Greenpeace.

Like it or not, it could be regional and district councils who will have to make the inaugural front-line decisions about whether fracking can take place in their respective provinces.

That scenario could also change, as the technique is being investigated by the Parliamentary Commissioner for the Environment, whose recommendations could, in the extreme, call for a country-wide moratorium on fracking until more is known about the controversial practice.

While dozens of container vessels such as the Rena ply New Zealand's sea-lanes and thousands of deep-water holes were safely drilled in the Gulf of Mexico, the environmental disasters of the Rena grounding and Deepwater Horizon explosion have given vivid life to the potential for "worst-case" scenarios.

What is incensing environmentalists and raising alarm in communities about fracking is the potential for toxic fluids, which in general make up about 3% of the high-pressure injection fluids, to escape and contaminate underground water aquifers. Released hydrocarbons could potentially do the same.

The Government wants to increase New Zealand's oil and gas exploration by 50% and has decided not to impose a moratorium on fracking at present, instead waiting for the environment commissioner's report and recommendations.

With 17 oil basins around the country, ranging from the relatively low-investment risk Taranaki to high-risk, deep-water frontier Great South Basin in the Southern Ocean, the Government is targeting an annual sector-value increase from $3 billion to $12 billion per year.

Fracking has been used successfully dozens of times in Taranaki in recent decades, and while understood to have never been used in the South Island, listed oil and coal seam gas explorer L&M Energy has shown interest in southern "shale" oil deposits, under its "unconventional" prospects guidelines.

Shale, a clay-based rock, has natural gas and oil trapped in it because of its density, but they can flow if the rock is fissured and high-pressure liquids then displace them, channelling hydrocarbons to the surface through the well casing.

Before the Christchurch council's moratorium, in mid-February the Taranaki Regional Council released its risk assessment on fracking, based on data from 60 fracking events at 33 oil and gas wells over a period of 18 years, up to 4km underground but at an average 2.4km deep.

"If hydraulic fracturing operations are carried out properly, it is unlikely that contaminants will reach overlying freshwater aquifers in the Taranaki region.

"However, although unlikely, it is not impossible," the report said.

The Taranaki council noted fracking at "relatively shallow depths" under aquifers, which generally lie no deeper than 1000m, did pose a greater level of risk and called for a "more stringent regulatory oversight".

Leakage of fracking contaminants or hydrocarbon gasses, to the surface would have to pass through "hundreds to thousands of metres in most cases" of low-permeability "geological seals", natural barriers to hydrocarbon leakage, the report said.

The Taranaki council has, since July last year, required resource consents for fracking, under the Resource Management Act.

In the lower South Island, L&M Energy (LME) may appear to be a junior player looking for oil, gas, methane gas and shale oil, but it has in reality spent tens of millions of dollars over decades in its numerous searches.

LME is seeking to increase total land holding to 25,663sq km in five additional South Island permit applications, including the Canterbury plains and eastern foothills. Most recent news has been coming from its coal seam gas drilling programme, about 60km south of Dunedin, at Kaitangata.

LME has said while considering fracking for shale oil extraction, it has no plans to do so.

Energy and Resource minister Phil Heatley said a week ago he had "no concerns" over fracking, given the "reality" fracking had been happening in Taranaki for 20 years with no incidents of water-quality issues or earthquakes.

"In New Zealand where it's practised very deeply in the earth, well away from aquifers, it appears to be safe. The Parliamentary Commissioner will have the last word," television's Q&A reported last week.

Green Party mining spokesman Gareth Hughes is calling for an immediate country-wide moratorium on fracking until the commissioner's report is released, likely near the end of the year.

"Heatley is digging his heels in and, yes, we are up against it [getting a moratorium].

"But, six months ago, no-one had heard of fracking and more than 6000 have signed the petition and several councils are investigating moratoria," he said when contacted this week.

Mr Hughes is critical of the Taranaki council report, noting its data was self-admittedly based on industry-provided data.

He said he had tabled two, separate, oil company reports in Parliament claiming breach of consents, including water contamination, from incidents of a broken well-casing, leak of fracking fluids and well blow-outs.

He claimed diesel had been used in a early fracking process and traces of highly toxic benzene, ethylene and zyalene had been found at a Taranaki well, but the latter three could have been naturally occurring.

"The TRC [Taranaki Regional Council] report was not as comprehensive as it should have been," Mr Hughes said.

"It's not well regulated by the Government at the moment because regional councils, who have limited resources and expertise, are charged with granting resource consents," Mr Hughes said in an earlier statement.

He said Mr Heatley was overstating the economic benefits of expanded oil and gas exploration in New Zealand as expanded profits from the industry would go offshore to foreign-owned companies, citing Brazilian oil giant Petrobras, which holds oil exploration permits in New Zealand.

For readers trying to make sense of the claims, it must be taken as read that commercial interests and environmentalists alike both put their spin on their respective claims and counter claims.

No story on fracking is complete without mentioning internet footage last year of tap water being lit by a match in the United States, one side claiming it was from leaked fracking contaminants entering a local water supply, while it was countered that residential water bores had intersected methane gas pockets in shallow coal beds.

Energy and resource-sector lobby groups, Straterra and the Petroleum Exploration and Production Association of New Zealand (PEPANZ), predictably support fracking as a viable option, but in response to environmentalists' claims, both have been proactive in commenting and amassing online information.

PEPANZ chief executive David Robinson said in a statement last month he supported the environment commissioner's investigation, reiterating Taranaki's experience that in fracking of 28 wells there were no incidents of drinking water or land contamination or earthquakes linked to fracking.

"We're confident that this inquiry will dispel misinformation about the environmental impacts of hydraulic fracturing and will show what great lengths the industry goes to ensure the practice is done safely with proper caution taken," Mr Robinson said.

PEPANZ maintains fracking in New Zealand does not include the use of toxic BTEX chemicals, highly carcinogenic chemicals, which are used in some places overseas.

Straterra chief executive Chris Baker highlights that fracking has been used for about 60 years and the engineering processes, materials and chemicals used, and related risk management, have evolved and advanced over time.

"As the more easily-tapped sources of oil and gas are extracted, and as the price of petroleum rises, the world is likely to see increased use of 'unconventional technologies', including fracking," Straterra said.

For any New Zealand fracking operation, up to 12 chemicals or additives are required for the process to work and they must be named, explained, and approved by the Environmental Protection Agency, under the Hazardous Substances and New Organisms Act 1996.

Straterra did not believe the environmental commissioner's investigation report was necessary, but said it would support it nevertheless.

It is under the Resource Management Act that the environmental effects of fracking will have to be tested, publicly notified, or not, with the approvals and consents process in the hands of regional and district councils.

Otago Regional Council resource management manager Selva Selvarajah, when contacted said no applications had been made on fracking in Otago and while there was no specific "fracking policy", it would be covered under the RMA.

"Such cases would be looked at under [clauses] wastewater discharge to land, or to water," he said.

Following release of the Taranaki Regional Council report, Hydrogeologic risk assessment of hydraulic fracturing for gas recovery in the Taranaki region, that council was developing guidelines for others to consider, highlighting again they would come under the RMA.

As part of any resource consent application for fracking, Dr Selvarajah said the ORC would be asking how far below aquifers fracking work would be undertaken.

He said the Taranaki experience had shown the effects of deep fracking thousands of metres below aquifers "were virtually nil".

Fracking is going to have a politically charged lifespan.

If National can not sway voters' sentiment, sooner rather than later, the fracking issue threatens to tumble into a snowballing election issue, spurred on by images of environmental disasters.

Until then, local councils could in the short-term face a morass of objections, litigation and potential liabilities when resource consents allowing fracking are being sought and potentially granted.

Fractious about fracking
To prepare for the fracking process, a drill hole is lined with steel casing and explosive charges are detonated in the pipe to induce hairline fractures in the rock.

A mixture of about 97% water and sand and 3% chemicals is injected at high pressure into the fissures, allowing gas or oil to flow more freely. "Shale" oil and gas is generally deeper, and in less porous rock, than earlier traditional reservoirs, which were closer to the surface.

However, there is growing concern worldwide the toxic chemicals used in fracking fluid can get into underground aquifers and contaminate water sources, as could some of the hydrocarbons released.

Fracking chemicals (Example of a chemical mix which could be used in NZ):