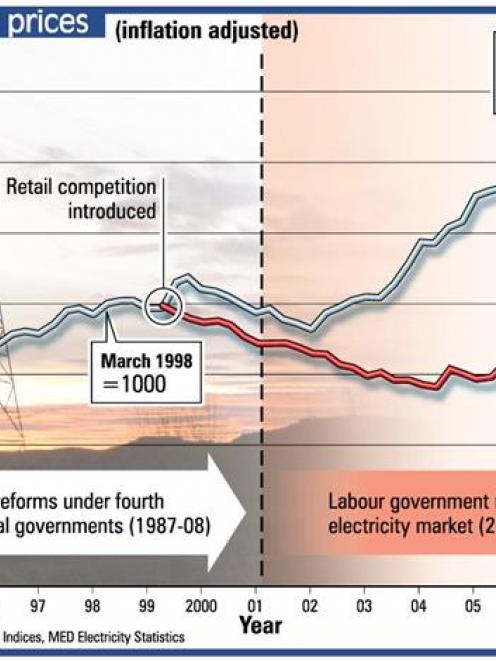 Household electricity prices - 1991 to present. ODT Graphic.
Former Energy Minister Max Bradford takes issues with criticism of the electricity reforms of the 1990s. It is policies since 2002 that have caused prices to explode.

In a recent ODT opinion page article, retired engineer Lex Smith opines, among other things, that market forces "will do little for the long-term good of New Zealand in the initial supply of electricity".

He then criticises the electricity reforms of the 1990s which often erroneously bear my name.

This is par for the course of those commentators who do not understand the role of market forces in electricity generation and supply, or approach the electricity sector from an ideological point of view: any private sector involvement in generation, transmission, distribution (lines) or retail sales is anathema.

Mr Smith demonstrates his complete misunderstanding by describing a couple of analogies. He asks us to imagine a national roading system run by six companies, each trying to get toll charges for bridges and highways. Even more absurdly he postulates six "police companies" enforcing the law nationally. He says these are "a reasonable analogy" of the electricity sector reforms. It's rubbish.

Our electricity system comprises a number of competing or stand-alone generating companies which supply electricity through a wholesale market. The market determines the basic prices that generators (such as Contact or Meridian) charge their own customers or other retail distributors (such as Powershop) which then market to their retail customers.

The electricity is distributed via the national government-owned transmission system (Transpower) and then locally through lines companies which are both publicly and privately owned. They are all monopolies, where market forces can never work, nor have ever been contemplated as market-driven. They are regulated by the Commerce Commission. These monopolies are the proper analogy in Mr Smith' roading system.

It is the competing trucking and bus companies on his roading system that are the correct analogy to the competing generation and retail companies in the electricity system.

Competition through a market works very successfully for the generation and retail distribution components, as it does all over the world. It is similar in the communications sector: here there are competing companies (Vodafone, Telecom, 2Degrees) for the supply of services. The core network which carries those services is a monopoly company (Chorus) recently established after 15 years of government pressure to separate the monopoly and competing components of the telecommunications sector.

Having disposed of Mr Smith's misconceptions, the question is whether the electricity reforms have introduced competition and consumer choice. The first point to make is that the reforms were started in 1989 under the fourth Labour government and continued for the following 20 years. There were eight ministers of energy in that time, four National and four Labour.

At every stage over that period, successive governments introduced more businesslike and market incentives on the state, local body, and privately owned entities in the electricity sector. Monopolies were broken up or regulated by government. Where competition could be introduced, it was. Consumers were given much more say in who supplied their power: from 1999 they had choice which they had never had before. Most have between three and seven companies to choose from.

Most importantly, politicians were removed from the process of setting prices, or deciding where power stations would or wouldn't be built.

It is very clear that once the decade of reforms established the full marketplace by 1999, electricity prices fell in real terms. They hadn't done that for the preceding 30 years on a consistent basis without taxpayer subsidy. The chart makes this clear.

However, matters changed from around 2002 onwards, after the Clark Labour government began to re-regulate the competitive parts of the electricity sector, and impose conditions which required generators to invest in expensive forms of electricity generation.

For example, the government imposed a moratorium on new coal-fired power stations which were relatively inexpensive forms of generation compared with the renewable options favoured by government, principally wind, hydro and gas. These were understandable decisions to move towards greater renewable power generation, but they have imposed a high cost on consumers.

Other policy decisions helped raise the cost of power to consumers: a carbon tax; the ill-advised intervention to cap wholesale prices with a government-funded peaking power station; the extraordinary red tape imposed by the Labour government's Electricity Commission.

So electricity prices exploded after 2002. This had nothing to do with the market reforms, or who owned the companies.

Mr Smith also asserts that the present arrangements in New Zealand do not provide for a sustainable and secure power supply system.

But the historical evidence is clear: the old New Zealand Electricity Department did not guarantee security of supply (for example, the blackouts of 1992-93), and the worst examples of poor planning were by public institutions (for example, the 1998 Auckland system breakdown and inadequate transmission investment by a government monopoly, Transpower).

The problem of security and adequacy of electricity supply - if there is any - is because of the type of generation capacity. The country depends on rain and wind to generate some 60%-plus of our electricity and if it doesn't rain or blow then it doesn't matter how much generation capacity we build, they can't supply electricity to consumers. That's a problem neither Mr Smith nor other detractors of New Zealand's mixed ownership electricity system have a workable answer for.