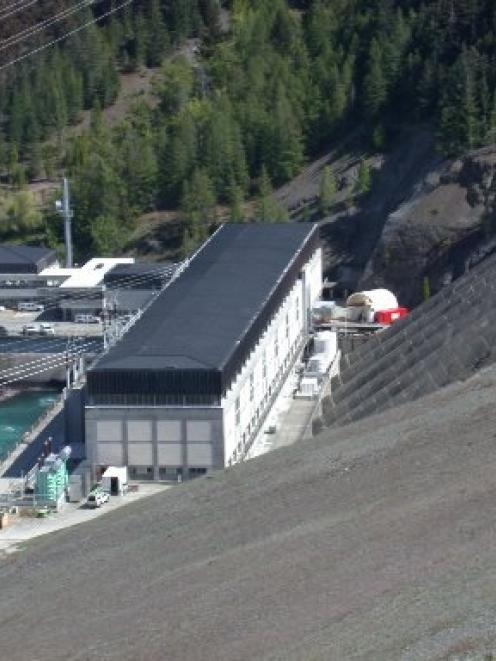 Meridian Energy's Benmore power house in late 2008 when it was undergoing a $67 million refurbishment and upgrade to improve its efficiency and produce more electricity. Photo by David Bruce.
The price of shares in the partially-listed state owned enterprises will be pushed up significantly as institutional investors, particularly superannuation funds, compete to meet demand.

Prime Minister John Key's "mum and dad" investors could be in line for a fast profit if they wait for institutions to bid up the price before selling.

Research released by broker Forsyth Barr showed that under the proposed methodology changes to the NZX equity indices, all four of the SOEs being proposed for a partial sell-down would be in the top 20.

Meridian Energy would be third on the NZX-50 behind Telecom and Fletcher Building.

Mighty River Power, the first to be sold off this year, would be eighth, with Genesis Energy and Solid Energy at 18 and 20 respectively.

A further sell-down of Air New Zealand would put the national carrier at 30.

Mr Key has promised that New Zealand shareholders would get first go at the shares when the companies are partially listed.

Up to $7 billion is expected from the sell-down, but Forsyth Barr now believes the Government will only sell down 40% of the assets, rather than the 49% earlier announced.

That would give a return of around $5 billion.

Forsyth Barr broker Peter Young said the Government had previously stated that the maximum sell-down of each SOE would be 49%.

"However, we believe that to allow for more capital flexibility an appropriate sell-down level could be in the order of approximately 40%."

The Forsyth Barr calculations had been based on a 40% sell-down level.

Institutions and funds which track the NZX will be required to buy the new shares in proportion to their weighting in the index and they will have to buy in an open market.

Iwi and funds will likely be allocated a scaled proportion of the listing in the initial public offering (IPO), but the allocation will not be enough to meet their demands.

The only way to get the shares will be to bid up the price until private shareholders feel it is worthwhile to sell.

However, brokers believe there will be wide interest in the floats from overseas funds which view energy companies as 100-year investments.

Overseas investors look at the income returns from investments in energy companies, often over a 25-year timeframe.

Mr Young said that due to the size of the proposed floats, there was the question of how the NZX would meet the timing of the subsequent inclusions in the NZX benchmark indices.

As a guide, Forsyth Barr had looked at recent large cap listings, in particular Vector in 2005 and APN in 2004.

For each of those listings, the NZX was mindful of the subsequent weightings in the 50 index and therefore the required number of shares that would be needed for passive funds to be bought in order to gain a neutral weighting for the stock.

To reduce the price impact, due to the demand, the NZX tranched the index inclusion over two subsequent months for both the listings, with 50% of shares included in the first month of listing and the remaining 50% the following month, Mr Young said.

The ability for the issuing of new non-voting shares in the power companies was a flaw in the Government's legislation.

"Any issue of any non-voting shares will dilute the Crown's equity in the companies and reduce its influence in the appointment of directors. We know that companies are run by directors, not shareholders."

The "backdoor clause" to allow for the sale of non-voting shares could theoretically see the Government's shareholding in the power companies plummet to 1%, he said.

Labour leader David Shearer agreed with Mr Peters, saying that it was possible the taxpayer could end up as owners in name only, with just a fraction of the profits.