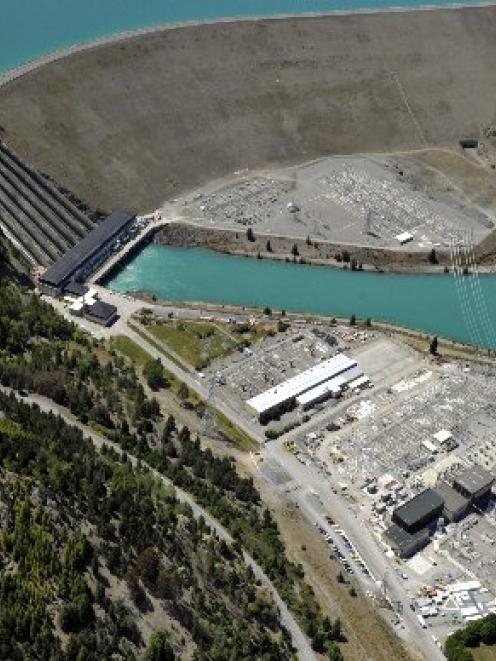 Progress on a major upgrade of the high-voltage link between Benmore and Haywards, near Wellington, can be seen in this aerial photograph of the work on Transpower's new control room and transformer building in the foreground. In the background is the Benmore dam. Photo by Gerard O'Brien.
The arrival from Germany this month of four new transformers at the Transpower high-voltage link at Benmore has given a boost to a $672 million upgrade of the electricity line between the North and South islands.

The high-voltage direct-current link (HVDC) is a vital part of shifting electricity between the two islands, but is only now undergoing its first major upgrade in 45 years.

That includes major expenditure at the southern end - the HVDC substation at Benmore - along with similar work at the northern end - Haywards near Wellington - which will increase the link's capacity from its present 700MW to 1400MW by 2014.

The "Pole 3" project includes constructing a four-storey building to house the electrical equipment and control room for the new line.

At the peak of construction this year, up to 100 people were employed on the Benmore upgrade.

They have been accommodated in motels, hotels and rented homes as far away as Twizel and Kurow.

The foundation for the new building was poured in September last year and, since then, workers have been raising the structure on large reinforced blocks, which form part of earthquake proofing allowing the building to withstand a one-in-2500-year seismic event.

On top of those blocks went shock absorbers (lead-rubber bearings and sliders), allowing the building to move during an earthquake.

A concrete floor was laid to take the four transformers (each weighing 250 tonnes), three new, modern thyristor converters to convert electricity from alternating current to direct current - which is more efficient to transmit - a control room and other equipment.

A new switch station, about half the size of the existing one, is being added at Benmore for Pole 3.

The project is a major component of Transpower's wider investment plan to reinforce the interisland grid.

The link is critical in balancing energy use between the islands and will allow for electricity to be transported to where it is needed, regardless of where it was generated.