Bringing the colour back 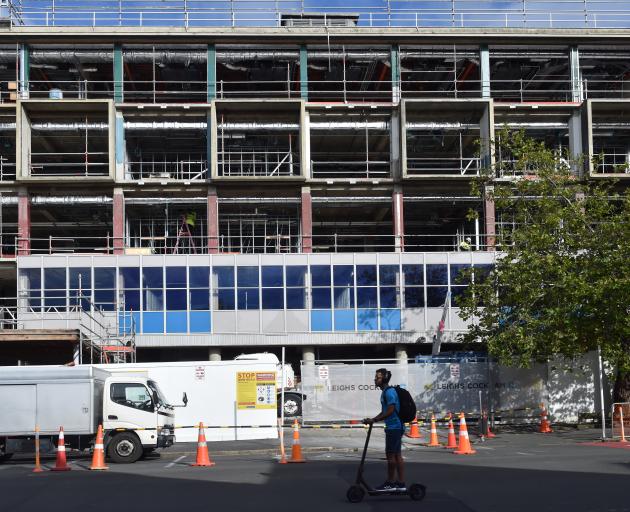 Contractors have started installing a replica coloured glass facade on the University of Otago’s Walsh Building, which will restore the unique look of the heritage-listed building. PHOTO: PETER MCINTOSH
One of Dunedin’s colourful old gems is re-emerging out of a maze of metal and concrete foundations.

The former University of Otago dental school (Walsh Building) was stripped bare as part of the university’s $130million dental project, but is starting to look like its old self again, as contractors start installing the replica coloured glass facade wall that made it so prominent.

The modernist building, with its clear, grey and cobalt blue windows, was revolutionary when it was completed in 1961, and Heritage New Zealand has since listed it as a category 1 historic place.

Chief operating officer Stephen Willis said the facade had deteriorated over time and was earmarked for replacement under the dental project.

"The installation of a replica glazed curtain wall will restore the unique look of University of Otago’s heritage-listed Walsh Building."

The replica wall was fabricated in Christchurch to modern thermal and seismic standards.

"High-performance glass has been colour matched precisely to the three original glazing shades which were clear, grey and cobalt blue."

He said the installation was expected to be complete by May, and the building was scheduled to reopen in early 2021.

It would house laboratories, teaching rooms, dental simulations, student areas and offices for the Faculty of Dentistry.

Eventually, it will be connected to the university’s new Clinical Services Building, via an 1800sqm atrium that is still under construction.