Bugging out at Otago Museum: grub's up 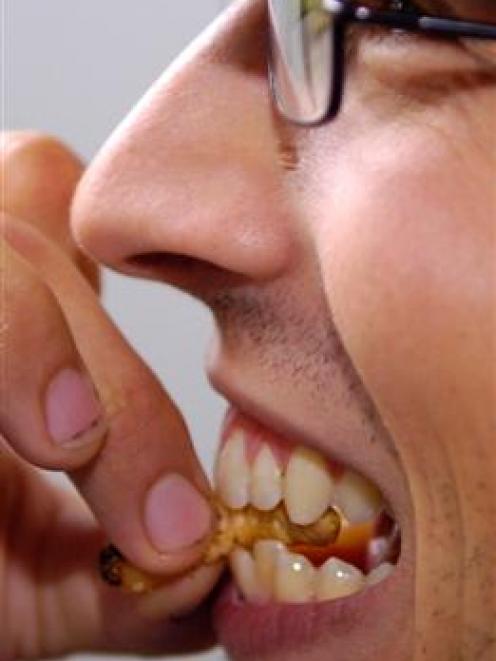 The 27-year-old tourist from Ohio, in the United States, has been in New Zealand since October, but was yet to try the traditional Maori delicacy - until yesterday.

Mr Barrish was among 35 people to gather at Otago Museum in Dunedin for a taste of Kai Tahu kai, during a cooking demonstration staged as part of the Mo Tatou exhibition running since December.

But his nerves at stuffing the pan-fried but still wriggling morsel into his mouth proved unfounded, as Mr Barrish chomped it down and declared it almost flavourless.

Although, to be fair, that was probably a good thing, he said.

"That's the first time I have eaten anything wriggling," he said.

"It wasn't bad. It doesn't really have too much taste. It's almost like eating an unsalted peanut."

Te Papa online described the grubs as "the most delectable" of all wild foods found in New Zealand's forests, with a flavour comparable to peanut butter.

They are produced by huhu beetles as larvae, which hatch as grubs and burrow into wood, where they remain for up to three years while growing up to 75mm long.

The grubs were considered a delicacy in the traditional Maori diet, and their high fat content meant they could be lifesavers in the bush, the website said.

They could be roasted over hot stones or eaten raw "if necessary".

However, others at yesterday's cooking demonstration were less eager to give traditional kai moana the thumbs up.

Dunedin girl Amy Hook (7) swapped a day baking "dinosaurs and cupcakes" at home for a visit to the museum with her father, Jason Hook.

She soon found herself scoffing down a chunk of pan-fried eel, which tasted "kind of like tuna" - tuna is the Maori name for eel - and which won a toothy grin of approval.

Cockles cooked in layers of kelp proved less of a hit though.

"Yuck", was her review, before the remains were handed to her father to devour.

Members of the audience - young and old - were also invited to share stories of their expeditions gathering whitebait, cockles and other treats, while guests demonstrated recipes and offered samples to taste.