By Molly Houseman
1 Comment
Dunedin residents were buzzing around the city at the weekend.

The Every Bus Route Challenge, hosted by the Otago Heritage Bus Society and Orbus Dunedin, marked the last few weeks of free bus fares and the introduction of the new Bee Card ticketing system at the start of next month.

Participants gathered at the Dunedin Bus Hub in Great King St at 8am on Saturday, armed with bus timetables and preparing for the 12-hour challenge.

Dunedin resident Amanda Corbett travelled eight of the 23 bus routes in the morning.

She said participants took the first bus together before splitting up and planning their own trips. 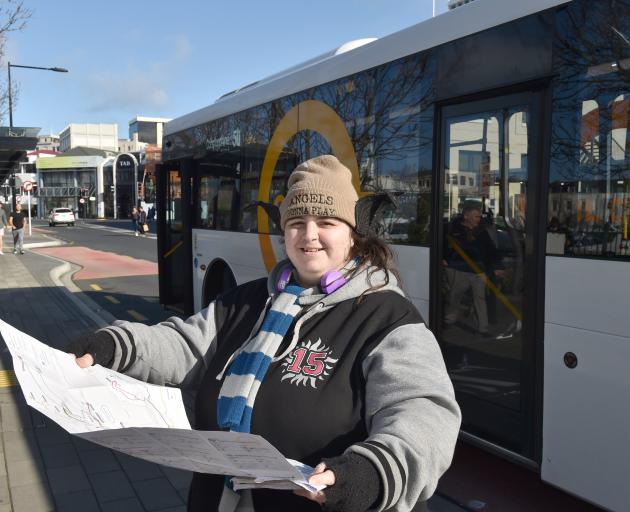 Amanda Corbett checks her schedule at the Dunedin Bus Hub, in Great King St, as she takes part in the Every Bus Route Challenge on Saturday. PHOTO: GREGOR RICHARDSON.
But there were many "calculations" to do.

It had to be timed perfectly as hour-long bus journeys had to be factored in and at some changeovers there was only a one-minute window to jump on to the next bus.

Ms Corbett’s afternoon trips included the Harington Point and Brighton routes, which she wanted to experience for the scenic photo opportunities.

The participants had to highlight the routes as they completed them and have them signed by each bus driver to ensure there was no cheating, Ms Corbett said.

Otago Heritage Bus Society chairman Andy Langford said there was a "happy vibe" on the buses.

"It is great to see the buses being used and people knowing the routes so well."

The group finished back at the bus hub at 8pm, where the winners were determined.

They were all given Bee Cards with travel credit on them.

The Bee Card ticketing system will start on buses in Dunedin on September 1 and in Queenstown in mid-September.

When I was getting on 55 at the bus hub on Thursday:

Drivers don't seem to have them or even know what they are.