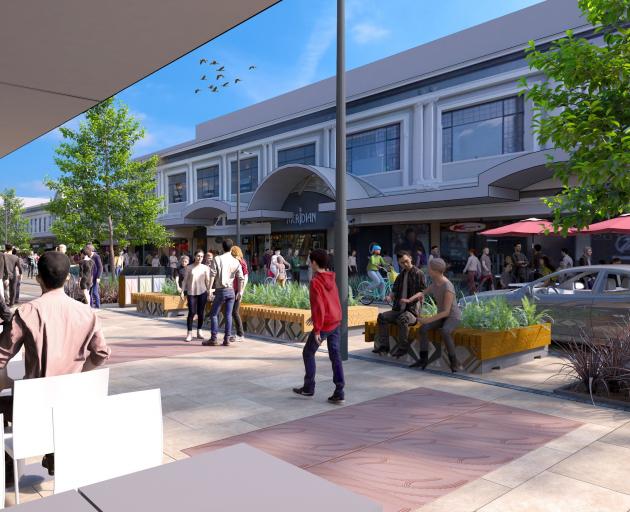 What a section of George St might look like. IMAGE: DUNEDIN CITY COUNCIL
Retailers and shop owners worry Dunedin's main street will become harder to visit if a significant section is made one-way.

Heart of Dunedin, a group made up of central city retailers, building owners and members of the public, says it worries about the potential impact of some of the plans included in the preliminary concept design for George St.

The Dunedin City Council will vote on the preliminary design - which is part of a planned $60 million upgrade of the central city - for the street from Moray Pl to Albany St at a planning and environment committee meeting tomorrow.

An online poll of about 4600 Otago Daily Times readers found 71% were in favour of the design.

Heart of Dunedin spokesman Jason La Hood said the group had only recently been shown the design and still needed time to process it but felt restricting traffic to one direction would not make the area more vibrant and attractive.

"Our initial thoughts are that a one-way George St will act as a further impediment to visiting the CBD."

Single-vehicle journeys would be halved under the design, which was not the best outcome for retailers in the central city, he said.

"You can have the smartest-looking CBD but if you can't easily access the area then retailers will suffer and the area will lack vibrancy."

There were concerns no more parking had been provided to offset the substantial parking provided by bulk retailers on the fringe of the city.

Both Heart of Dunedin and the council wanted the same outcome, which was to improve the central city so it was an attractive and accessible destination to spend time and shop, he said.

Central city advisory panel chairman Cr David Benson-Pope said it was natural for retailers to be concerned about vehicle movements and access to their businesses, but history, including in Dunedin, showed an improved physical environment was good for everyone, businesses included.

No options were off the table at this stage and the Heart of Dunedin as well as the general public would continue to have an opportunity to give feedback as the design progressed, Cr Benson-Pope said.

"I'm really quite buoyed by the positive reaction to the initial design and I just hope lots of people get involved."

When will Council start listening to the Dunedin residents who are asking for more parking not less? They wont!

I want less parking. But the DCC haven't asked my opinion, so presumably there is at least one other person around here who thinks cars are the transport of the past.

I think these businesses, zoned commercial and paying commercial rates, and needing street access from their road frontage for customer access, also disabled access, but, most critically, in order to be able to carry out the essential commercial activities of stock delivery and dispatch, have EXISTING USE RIGHTS. But I think, under the Resource Management Act, it's the businesses that have to pro-actively make a legal case that they have those rights. I don't think the DCC has to go through any process of taking them away but can just assume that such rights do not exist and proceed. IMO it would be worth the affected George St businesses acting together on this fairly quickly because, if the proposed plan goes ahead, I don't see how they are going to manage their stock deliveries and dispatches. And, as a result, their whole commercial undertaking would be likely to be less profitable. Apart from natural justice, a key planning principle is 'certainty' i.e people buying property have a right to know its likely future planning rules. Bet these commercial property owners never got the slightest hint that the council would want to remove their street access one day.

I think this would be an excellent move for Dunedin's CBD. The likes of Queenstown's mall is a great example of how busy businesses can still be with more foot traffic and the restriction of vehicles accessing a main street. The Meridian Mall/Golden Centre provide plenty of parking and is free for the first hour which most people make use of already.

Agree. Businesses do better where people are free to walk and bike. Priority shouldn't be for 10 or 20 car parks over 1000's of pedestrians who are enjoying and shopping in the area. Why does every street have to have cars?

Business owners and landlords crying poverty, whilst the High Street looks dirty, grey and polluted. How many shoppers have you nearly hit trying to cross the Road, and how many of these shoppers simply refuse to run the gauntlet to get to the opposite store. Parking is a non issue as most of the spaces are hoovered up by shop workers and owners. Check the spaces pre 9 o'clock there's none!

There is quite a lot of research about how traffic calming and pedestrianization measures increases footfall, increases retail spending and improves property values. To compliment the DCC's efforts George St building owners should consider some capital investment in their individual assets and also to collaborating to curate a complimentary mix of tenants. The response to the demise of George St needs to be cohesive across owners and agencies.

There is no reason or need to have to drive along the main street through that area if proper traffic systems are built around it.

The world is littered with examples of failed council urban design in trying to turn streets into quasi malls. Have a look at Swanston St in Melbourne Aus. This area has been redesigned several times and continues to be a retail wasteland. It is a terrible mix of commercial traffic, trams and racing cyclists. Pedestrians avoid the area unless en-route to somewhere else and countless retailers have failed over the past 20 years. But DCC planners seem hell bent on repeating everyone elses mistakes.

Mr La Hood says DCC want to improve access to the area. Sorry but they simply don't. They want a quasi mall accessible by foot, bike and (god help us) scooter. Can anyone imagine a scenario better aimed at those under 30? Just a shame that doesn't fit the description of the people who spend real money in shops.

Dunedin cannot just be an endless vista of cafe's and restaurants with side walk tables. There just aren't enough people to make George St a massive food court.

Planners and councilors need to wake up and look at the project from the perspective of all citizens, not just students.

Quite right Keith more rate payers money wasted with no monetary return to said rate payer, the ones paying the bill.

This is such a good outcome for Dunedin and follows evidence-based design practice. I hope it goes through! If we follow other cities as case studies it should increase foot traffic which in turn increases retail sales.

This is a great idea, but just a bit worried about the one-way for cyclists - I think we will have some cyclists going both ways and the narrowness of the cycle lane may cause friction and collisions. Other than that, it looks great. I have seen many near misses as people rush across the road trying to get to a shop on the other side of the road as there is no pedestrian crossing in the long stretch between St Andrew Street and Hanover Street. Many cars do not stick to the 30km per hour speed limit.