Buster, a Dunedin yellow-eyed penguin, is on the mend after another predator attack and is bulking up in a bid to return to the wild.

Yellow-Eyed Penguin Trust wildlife vet Dr Lisa Argilla said she had previously crossed paths with Buster about two years ago, when he was flown from Dunedin to Wellington Zoo so she could amputate his infected toe. 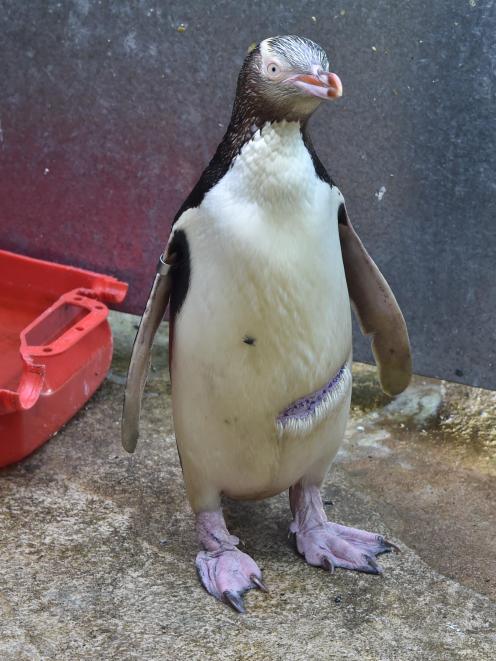 Buster has been taken to the rehabilitation centre at Penguin Place at Harington Pt with six other yellow-eyed penguins in need of fattening up. Photo: Craig Baxter

This followed an attack by a barracouta at Papanui Beach on the Otago Peninsula.

About a fortnight ago, Buster returned to her operating table, this time in Dunedin, after he was found at the beach with a ''nasty'' abdominal wound from a shark bite.

The surgery at Otago Polytechnic's Veterinary Nursing School was ''touch-and-go'' but the ''stroppy'' bird was a natural-born fighter and survivor, Dr Argilla said.

Buster was taken to the rehabilitation centre at Penguin Place at Harington Point last Friday with six other yellow-eyed penguins in need of fattening up.

Dr Argilla had discharged 24 yellow-eyed penguins, about 5% of the population, to the private conservation reserve in the past six weeks.

The penguin hospital at the polytechnic was funded by the trust because it was better than flying the rare birds to Wellington for hospitalisation.

''One of the main problems we face is infection from wounds,'' Dr Argilla said.

''In Dunedin, we can start intravenous antibiotics within 24 hours. Because of that, our success rate of saving birds is much higher.''

Penguin Place rehabilitation manager Julia Reid said Buster was recovering well and eating fish - a mix of king salmon and silverside - to raise his weight from 5kg to 8kg before being released back to the wild at the beach in ''a week or two''.