Call for change of focus 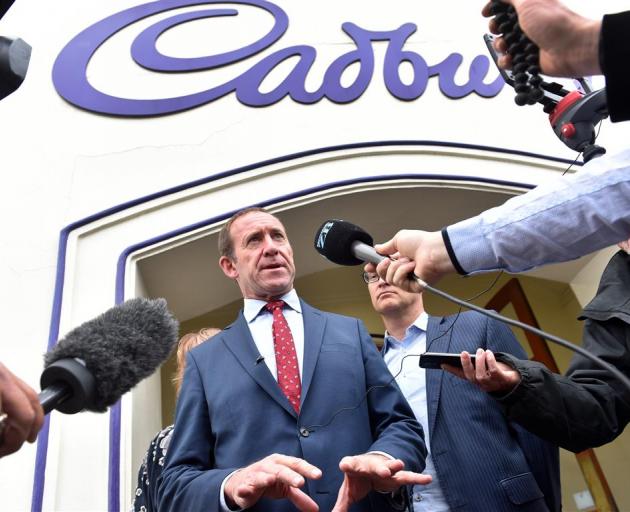 Manufacturing still has a future in Dunedin, despite the corporate "greed'' behind plans to close the Cadbury chocolate factory, Labour leader Andrew Little says.

Mr Little was commenting after meeting union delegates at the Cadbury factory while on a visit to Dunedin yesterday.

Speaking to media outside the factory gates, Mr Little criticised owner Mondelez International for its plan to close the factory by March next year, with the loss of 362 jobs.

But he insisted it did not spell the end for manufacturing in Dunedin, despite previous high-profile closures including Fisher & Paykel and Hillside workshops.

"We've got to remember, Cadbury's is doing this not because their plant is not profitable. They just want more profit out of it.

"They are doing it for greed,'' Mr Little said.

Dunedin, like other regional centres, needed to shift its focus to more "high-tech'' and "high-skill'' manufacturing, but there was still a place for such industry in New Zealand, he said.

And, in the meantime, Mondelez needed to support its workers by ensuring they received training to prepare for new roles, he said.

The company also needed to accommodate workers offered new roles ahead of the factory's closure, by allowing them to leave without the loss of their redundancy packages, he said.

"They are doing this because they are greedy and want more, so they jolly well have to look after this workforce, and make sure this is a workforce that has a fair chance, as the plant finally closes, of getting good jobs elsewhere.''

Mondelez revealed its proposal to close the factory last week, and expected to announce its final decision early next month, once staff were consulted.

Mr Little said it would be "a hard ask'' for workers to convince Mondelez to keep the factory open, but suggested the company's consultation should be extended.

"It is classic global corporate behaviour. They've spent a year putting the plan together. They then want the union to have sort of 10 days to respond.
"That's pretty stupid stuff from a mega-global corporate,'' Mr Little said.

"It will take much longer to consult with a workforce of this size than that. They've got to pull their heads in on that as well.''

Mr Little said Labour, in opposition, had no "levers to pull'' to save Cadbury, and it would be "pretty hard to yank it back'' if a Labour-led government was elected in September.

Labour's focus was on putting "moral pressure on Cadbury's to do the right thing for this workforce and for Dunedin'', he said.

Mr Little did not support a boycott of Cadbury products, saying that would be "the least helpful thing to happen''.

Mr Little also criticised the company's "unlawful'' gag order, after staff leaving the factory told reporters last week they had been told not to speak to media.

A Mondelez spokesman, speaking last week, denied a media ban was in place, and some staff did speak on Friday, after E Tu union intervened, vowing to fight the ban.

"I think the company's just got to knock off the mega global corporate sort of autocratic tendencies and understand that this is emotional, it's difficult for people, and people have got to be allowed to say how they feel about it.''

Why can't we make it international? I live 7 miles from Cadburys Bournville in Birmingham. If they were to protest over here in the UK, maybe they would listen more in New Zealand.

What is interesting is for the year ended 31 December 2015, the company (Mondelez Investments) made $9.2m up from $5.3m in the prior year according to the Companies Office. I t would be interesting to know how they performed up to 31 December 2016 but unfortunately it is unlikely those accounts will be filed prior to closure. There may be other companies other than Cadbury within these numbers but it warrants further attention.