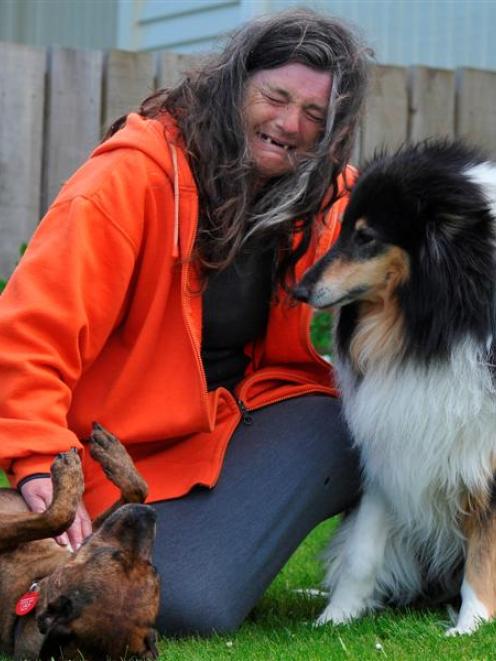 Housing NZ tenant Taina Goodwillie said HNZ demanded she get rid of her 10-year-old collie Bracken a month ago.

Ms Goodwillie said she has not been able to find Bracken a home and the dog's eviction date was up.

Bracken should be allowed to stay for three reasons, she said.

The collie was company for her Staffordshire-cross Angel, which had lived at the house for the past 10 years.

Since Bracken had been around, Angel had stopped her ''high-pitched howling'' when she was left outside alone.

Ms Goodwillie had a letter from her psychiatrist outlining her need for the two dogs for mental stability.

Finally, she said, Bracken deserved a peaceful retirement, as she had worked by providing company to her three past owners, who all had Aids.

Ms Goodwillie had taken Bracken in to the Brockville state house last November after her friend died from Aids, leaving Bracken homeless.

The company Bracken provided those sick people would have saved the Government money, as the state would have needed to provide less care, Ms Goodwillie said.

She wanted Bracken to see out her years in Brockville but if HNZ wanted her gone, she would rather the well-trained dog was rehomed than put down.

Discouraging dog ownership among tenants would cause distress and suffering to those who considered their dogs a member of the family, Mr Odom said.

He believed HNZ should introduce a policy to promote responsible dog ownership''HNZ could require all dogs living in HNZ housing to be desexed, microchipped, registered, and vaccinated. Such a policy would be supported by the SPCA.''

Responsible pet ownership was a symptom of a healthy society, Mr Odom said.

''The SPCA urges HNZ to soften its stance and take a more compassionate approach towards addressing any concerns it has regarding dog ownership among its tenants.''

''She already has permission for one dog, but unfortunately her home is very small and we're not sure that the property is suitable for more than one dog.''

Past complaints about Bracken needed to be taken into account, she said.

HNZ tenancy services acting general manager Jackie Pivac said while HNZ discouraged tenants from having dogs, it made exceptions and aimed to be as reasonable as possible.

HNZ was ''upfront'' with tenants about dog ownership and those expectations were in the tenancy agreements that tenants signed when they moved into the property, she said.