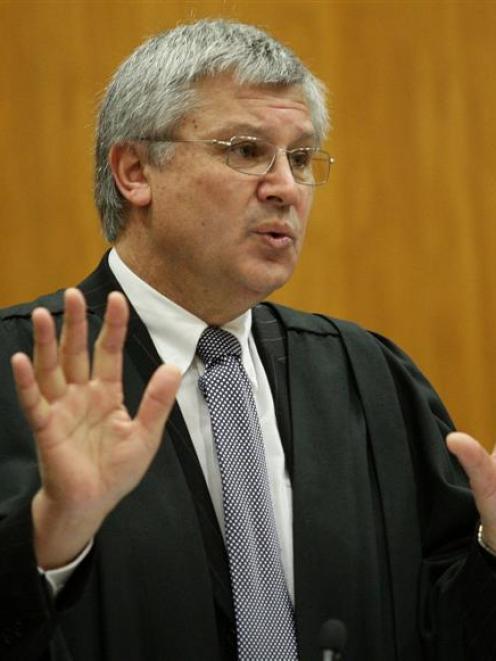 Robin Bates sums up in the High Court at Christchurch yesterday. Photo by The Press.
Clayton Weatherston made a deliberate, calm and premeditated decision to kill or mutilate Sophie Elliott, either before he went to her house or shortly afterwards, the jury hearing his trial on a murder charge has been told.

He stabbed or cut her 216 times in what the Crown says was a persistent, focused and determined attack, disfiguring and mutilating areas of her physical and sexual attractiveness.

And while the defence claimed Weatherston lost control under provocation when attacked by Sophie, Crown counsel Robin Bates said in his closing address yesterday there was nothing amounting to provocation.

They could not believe anything Weatherston said about the events leading up to the killing.

"Everywhere you look, where he's done something that reflects badly on him, he blames others," Mr Bates said.

"The particular trait of lying to avoid responsibility he seems to have in abundance."

Mr Bates pointed to the way Weatherston tried to blame the former girlfriend he assaulted for the particular incident.

Yet one of the psychiatrists who talked to her described her as intelligent, sensitive and "reluctant to embellish anything".

Weatherston, when he gave his account of the incident, had simply been "rewriting the script", turning it around to take the blame away from himself, Mr Bates said.

He tried to portray himself as a victim, as inexperienced, in the relationship with Miss Elliott, but he was 31 at the time, had been in several relationships and had "significant experience".

It was "totally wrong" to portray him as vulnerable and controlled by the situation, when comparing him to Miss Elliott at 22, Mr Bates said.

The accused's tendency to blame others was apparent in his disputes at the university, Mr Bates said.

On December 27, when Miss Elliott came to his flat they had an argument, and he made a list of her faults, assaulted her and, from what she told her mother and her friends, tried to rape her.

She said he told her she had an ugly chin, her eyes were too far apart, and went into specific details about areas of her body, something she found very upsetting.

Weatherston's version of the incident had been "a bit of pushing and shoving".

On January 7, when she challenged him in his office in the Commerce Building about what had happened on December 27, he denied anything had happened and said people would think she was crazy if she said anything, that he had been telling them she had psychological issues.

Weatherston suggested to psychiatrists who interviewed him after he killed Miss Elliott, that he had been in a downward spiral by the end of the year, not eating or sleeping much and taking too much Prozac, but there was no evidence of that, Mr Bates said.

He had a new girlfriend by mid-December, was going out with friends and making plans.

Killing and mutilating Miss Elliott on January 9 was another example of how he approached situations when in difficulties.

He lied and tried to avoid responsibility, suggesting what happened was her fault.

He arrived at the house with the knife in his bag but said later he had been carrying it for self-protection since 2006.

The circumstantial evidence, the position of his bag in the room did not support the accused's account of events in the room.

Nor did the evidence of Mrs Elliott of what she saw and heard at the time.

Weatherston claimed Miss Elliott kissed him when he arrived, but Mrs Elliott did not see that.

There was no provoking incident which triggered the accused's reaction, Mr Bates said.

He dismissed the defence claim Weatherston felt vulnerable without his glasses and that they were knocked off.

Weatherston's optometrist said the accused could see well up to 1m.

He asked the jurors to consider the respective size and weight of Miss Elliott and Weatherston, to look at what appeared to be defensive injuries on her arms and hands, the accused's lack of any significant injuries and where the bag was in the room.

There was no provocation, no loss of self control.

He was calm and in control and should be found guilty of murder.