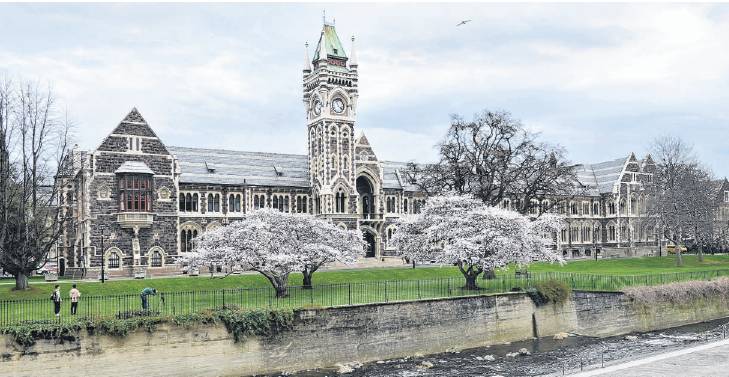 The University of Otago. Photo: Christine O'Connor
The Government has ruled out international students returning in July and August in time for the next semester but will be announcing a recovery plan next month for the $5 billion industry.

He said he would have made other plans if the Government had made it clear much earlier students would not be allowed back for next semester.

‘‘There hasn’t been any advice from the university or the Government and how they’re handling PhD students, doctoral candidates and researchers.

‘‘Because our stuff is time sensitive and it requires ethics and guidelines, and peer reviews and networks with our supervisors —it’s not something we can sit online and do.’’

Mr Khan, who was researching the Human Rights Act and its influence on long-term employment, said he would miss an important opportunity to collect data for his research if he could only come back next year — and the data he had already collected would be outdated.

He called for the Government to treat PhD students as essential workers because without research and publication, New Zealand was going to ‘‘lose its strategic position in a very competitive market’’.

Johnnie Wang, a student at the University of Auckland, was angry when he saw an email from Education Minister Chris Hipkins to the university ruling out a return of foreign students for the start of next semester.

The email said: ‘‘International students will not be returning to New Zealand in July or August this year. We hope that a suitable model can be developed so we can start to bring in small cohorts of students and begin building up towards 2021.’’

Mr Wang, who was also a student representative on the university council, said: ‘‘There is no reason why we believe that international students from other countries like China and the UK will be more likely to carry the virus than a Kiwi from China or the UK.’’

As well as costing revenue, the ban would damage the country’s academic reputation; that was not only unfair to students who could not come back but also to those who were here, he said.

‘‘Our university is forced . . . to consider how to survive and how to help students who are trapped offshore.

‘‘Originally, we could focus on providing higher quality education and to more students.’’

Universities New Zealand director Chris Whelan said his organisation, which represented eight universities, recognised it would take time to develop a plan to bring back students.

‘‘The failures over the last couple of weeks’’ showed ‘‘taking a little bit longer to get it right is important’’, Mr Whelan said.

‘‘We have plans in place [to accommodate thousands of students if they came back] but we fully understand that our assurance is not enough.

‘‘It’s got to be the Government that’s defining what are the standards and monitoring and assuring that those standards are actually met.

‘‘We are working with Government on that.’’

He said universities had some strong quarantine plans in place, and that they had respect for the mood of the nation; they only wanted to restart when they could do so safely.

Mr Hipkins said in a statement the Government would next month would outline how it intended to help the sector recover.

‘‘We know that the international education sector has been significantly impacted by the border closure and many providers and students are suffering.

‘‘I will be sharing a four-year strategic recovery plan for international education next month.

‘‘The plan will stabilise and strengthen the system to ensure that it’s mutually good for students, providers, and benefits New Zealand economically and socially.’’

All these "Smart" people in the education sector wanting the students to return, could come up with a solution, surely?
Why haven't these "Smart" people presented the government with a proposal that ensures quarantine requirements are met, at no cost to the taxpayer? And without impeding the return of Kiwis. I am certain that were they to do that then the government would be only too happy to allow them to do it.