Happy to be wearing a mortar board again 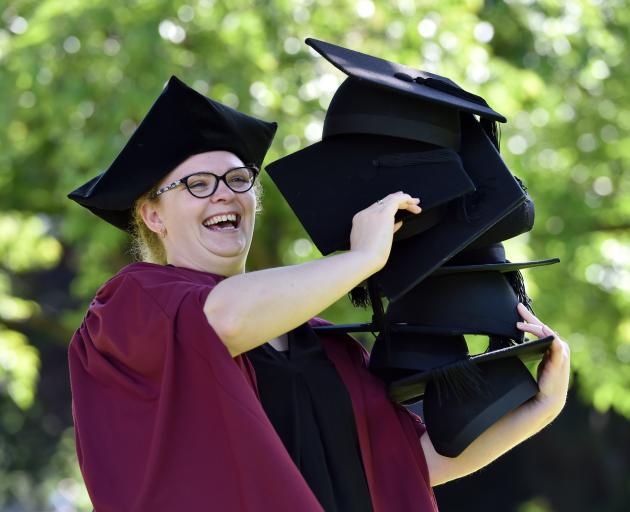 Miss Harding, an assistant research fellow at the Otago department of women’s and children’s health, fitted all those mortar boards as a Federation of Graduate Women Otago branch volunteer over the past three years.

When she began, her fellow volunteers were strangers but, over the years, they became more like family members.

"It’s nice to have the family back together."

And it was particularly meaningful when fellow volunteers helped to fit her for her own  mortar board and regalia on Thursday evening.

The prospect of graduating again herself, with a PhD, was becoming real, and she felt "pure elation" about it.

She already has a BSc in psychology from Otago. Had all that previous fitting work helped her own preparations?

"I think it’s a little easier in a way because I know what it should feel like [wearing the mortar board and regalia]".

For some people less familiar with the process, some of the technicalities could make preparing for the big day "quite a bewildering experience".

Sometimes, she only saw a graduand for about 30 seconds, as their  mortar board was being fitted, "but I feel as though I’ve been part  of their journey".For three hours yesterday, she continued fitting other graduands with their  mortar boards, as usual.

When asked about her PhD, Miss Harding said diet, exercise and sleep were traditionally considered "the three pillars of health", but less research attention had been given to sleep than to the other "pillars".

Her PhD research had offered a "regional and a nationwide perspective" on the relationship between "sleep-disordered breathing and academic performance" in New Zealand children.

"A little-known factor that may influence children’s learning is disturbed sleep, resulting from snoring or blocked airways during sleep, termed sleep disordered breathing (SDB)," she said.

A key message from her research was that when children presented with learning problems, screening and possible treatment for SDB should be considered.