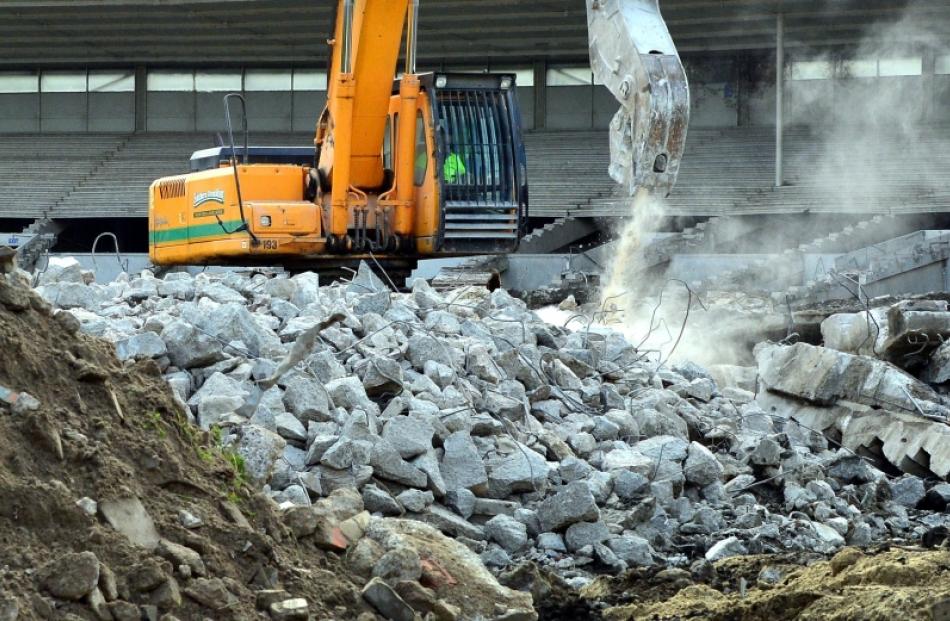 It has been a home away from home for generations of Otago and All Blacks rugby fans, couch-burning scarfies and Mexican waves, but the one-time beating heart of Carisbrook is no more.

The old ground's famed - and sometimes infamous - terrace is being demolished, and the Cantabrian in charge of the diggers says he intends to do a proper job.

Alan Edge, owner of Christchurch-based Southern Demolition, has confirmed his workers would leave behind almost no trace of Carisbrook, including the terrace and the hospitality complex above it.

All the ground's grandstands - including the four-storey terrace hospitality complex - would be demolished over the next few months, he confirmed.

Only the historic brick Neville St turnstile building and the remains of the playing surface would be left behind, he said.

The cleared site would then be fenced while new owner Calder Stewart sought tenants for one or more industrial developments. It was the first time anyone had confirmed the fate of the relatively modern terrace complex - it was built for $4 million in 1994.

Calder Stewart had obtained two demolition consents from the council - one covering the terrace complex and the other covering all the ground's other stands.

However, while a $200,000 bond from Calder Stewart would be repaid only if demolition was completed within six months, the terrace complex did not need to come down as part of the deal.

Dunedin Mayor Dave Cull suggested in June the complex might be spared, but Calder Stewart staff have so far declined to discuss their plans for the site.

Mr Edge told the Otago Daily Times his demolition crew would work their way around the ground over the next few weeks, removing the lower parts of each stand to gain access to corporate boxes on the upper floors.

That would make it easier for his workers to strip the interiors and push the material straight out the windows to the ground below, rather than climbing up and down stairs, he said.

Following that, the old stands' fittings, roofs and foundations would be removed, and about 90% of all material - including wiring, crushed concrete and roofing steel - would be recycled, he said.

Each stage of demolition would take about six weeks, but Mr Edge hoped to have most of the stands down within two months. That would leave only the terrace corporate box complex, which would be the last to go.

Demolition was expected to be finished by Christmas, leaving behind only the Neville St turnstiles and an otherwise-cleared and fenced site.

Mr Edge said he had enjoyed watching All Blacks tests at Carisbrook in the past, and, even for a Cantabrian, it was ''the end of an era really''.