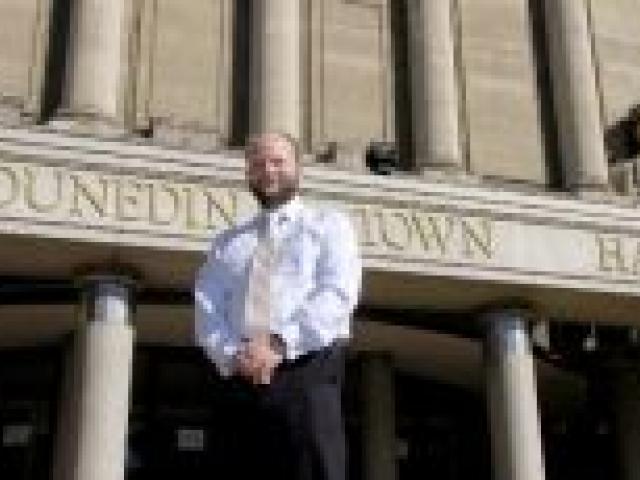 Svend Tolson, the new Dunedin Centre manager, suppports current refurbishment plans. Photo by Jane Dawber.
The new manager of the Dunedin Centre has given away a peripatetic lifestyle to come to the city but initially, at least, he could be sailing on the seas of high controversy.

Svend Tolson (41) has been employed by the Dunedin City Council to run the events centre at the town hall, as the local authority faces staunch opposition to a plan to build an extension onto the building's Harrop St frontage.

He supports the refurbishment plans, and hopes to drive the project forward.

Born and schooled in the south of Germany, Mr Tolson arrived recently from the United Kingdom with his wife and 6-month-old daughter. He is a British citizen.

With a background in hospitality management, he has worked ‘‘pretty much all around the world'', starting his career as a chef and working his way up to general manager of large hotels.

That included time on cruise ships from the Royal Caribbean to the Norwegian lines and, on land, the Hilton and Marriott hotel chains in locations including the Middle East and Southeast Asia.

Mr Tolson said he had experience in both refurbishing hotels and working with new cruise ships.

As well, he had his own consultancy, completed a masters degree in hospitality and business management, and was course leader at the Leeds Thomas Danby College in the United Kingdom, an institution similar to a polytechnic.

Having always wanted to come to New Zealand, he ‘‘did a bit of research, and Dunedin came out tops'' as a place to live and raise children.

‘‘What a fantastic town - the old buildings, the heritage. It's quite an amazing tucked-away place.''

Asked about his impressions of the Dunedin Centre, he said while he would not call it run down, it was ‘‘a bit well-used by the community. It needs upgrading to make it future-proof.''

Mr Tolson, who began his new job last month, said he had seen buildings in other parts of the world that had become run down and fallen into disuse, and it was hard to bring them back to life once that had happened.

He had met members of Hands off Harrop, the group opposing the proposed $45 million redevelopment of the centre, and the glass extension on to Harrop St.

The redevelopment was necessary, though, to make the building usable for future generations, he said.

‘‘It's really good for me to come as a newcomer. I have no emotional attachment, and I can see it objectively.

‘‘I can hopefully drive the refurbishment forward.''