Churches to merge at Caversham 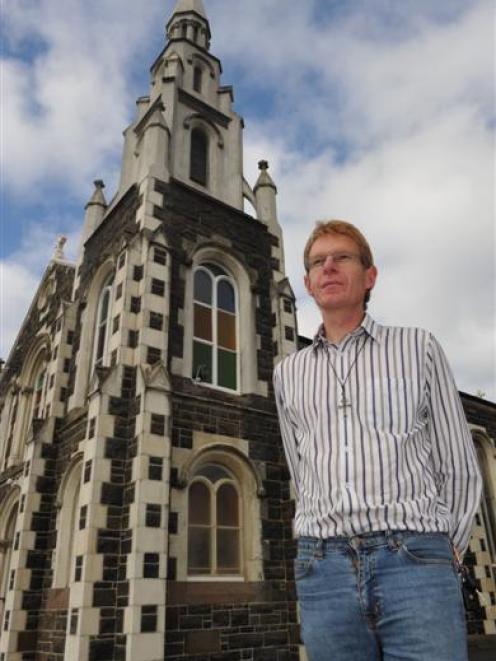 Coastal Unity Presbyterian Parish team minister the Rev Dr Bruce Hamill outside the Caversham Presbyterian Church in Thorn St. The 129-year-old church needs major repair and earthquake-strengthening work and demolishing it is being discussed. Photo by Jane Dawber.
Presbyterians in southern Dunedin have decided to merge two congregations into one on the Caversham Church site in Thorn St before the end of the year.

However, the move will require further tough decisions as the parish decides whether to upgrade or demolish the 129-year-old landmark.

The church has a category 1 listing with the New Zealand Historic Places Trust (NZHPT) because of its outstanding historical and cultural significance and its associations with two prominent South Dunedin figures, the Rev Daniel Dutton and MP and three-term Caversham Borough mayor Thomas Kay Sidey.

The Rev Dr Bruce Hamill, one of three ministers within the Coastal Unity Parish, said on Thursday the church was not in good repair and demolishing it was an option being considered.

In addition, the church did not meet earthquake standards. No assessment had been done on what strengthening work would be required or how much that had might cost.

The church's NZHPT listing "created an issue for us", he said.

Demolishing listed buildings was "not allowed".

"But if you can't afford to maintain a listed building, who is responsible for it? That is a question we have been asking."

Among other options to be considered for Thorn St was redeveloping Sidey Hall, next to the church, as a worship centre.

The St Clair church complex in Albert St would be be disposed of, Mr Hamill said. That might include its sale as is or its demolition and subdivision of the site for residential development. Any discussions would involve the kindergarten group which leased the church hall.

The decision to merge the two congregations was made at a meeting on March 25 attended by 95 parishioners. It was the result of "a year and a-half of reflection", Mr Hamill said.

With ageing congregations, particularly at St Clair and Green Island, and increasing costs, merger was the practical option, he said. But it was still an "enormous change" for parishioners, many of whom had been attending the same church for decades.

"For some, there was a lot of grief - a lot of emotion. For some there was a feeling of betraying the ancestors and losing memories."

The parish would go from three ministers to two, but one minister had already planned to retire at the end of the year so no-one would lose their jobs, Mr Hamill said.

The merger was more than just "retrenching on to one site", he said. The meeting also agreed to establish mission groups which would expand the church's work into the community.

The groups had not been finalised but ideas included providing hospitality and entertainment for the elderly, teaching home skills to young mothers, encouraging people to live sustainably, and creating a community garden.

Decisions
• Caversham and St Clair congregations to merge on Caversham site before the end of 2012; future of Green Island congregation reviewed in 2014.
• Options explored for sale or alternative uses for St Clair site.
• Options explored for Caversham site, including demolition and rebuilding of church and/or refurbishment and redevelopment of Sidey Hall.
• No further money to be spent on extraordinary maintenance of Caversham Church.
• Mission groups established to work in community.