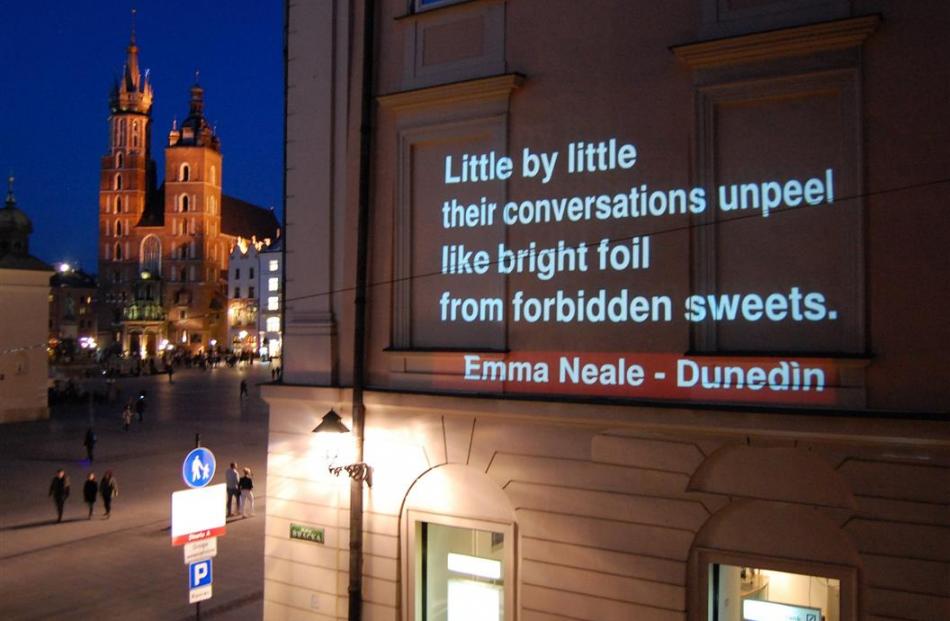 The poem Subtext by Dunedin writer Emma Neale is projected on a central Krakow building. Photo by Poemat Foundation and Krakow Unesco City of Literature.

The positive reaction to projections of Otago poetry in Krakow has the Polish city seeking more.

International project co-ordinator Justyna Jochym, of the Literary Department of the Krakow Festival Office, said poetry from Unesco Cities of Literature, including Dunedin, was projected in the centre of Krakow from August 1 last year.

Krakow was designated a City of Literature in 2013 and Dunedin in 2014.

For the projection project, a different poem associated with a different city was projected every day in English and Polish on the Potocki building, on the corner of Main Square and Bracka St.

The response to the project and Otago poems had been "extremely positive''.

Ms Neale said she submitted her poem Subtext for projection because its succinctness meant it matched the criteria.

The Polish translation had received positive feedback because it sounded good in Polish and maintained its "similar sense of repetition''.

"It was musical in Polish as well.''

Krakow residents enjoying the poem was "a buzz'' because it revealed her work was finding a wider audience.

The Krakow project is continuing and interested Dunedin writers can participate in the project by submitting work to the Emultipoetry website www.emultipoetry.eu/pl/game/