Class of '54 goes back to school 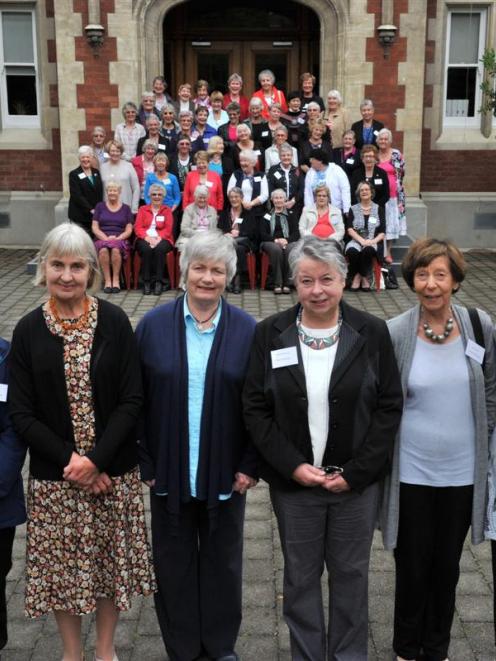 Otago Girls' High School 1954 third form reunion organising committee members (from left) Mavis Timms, of Dunedin, Mary Browne, of Palmerston, Win Parkes, of Timaru, and Eleanor Morris, Gay Turner and Dorothy Knudson, all of Dunedin, gather with other reunion attendees at the school in Dunedin on Saturday. Photo by Linda Robertson.
Lunch in the staff-room, a guided tour of the grounds and a celebratory cake made it a special day at school for about 50 former Otago Girls' High School pupils on Saturday.

It was the first time a reunion had been held for the school's third form of 1954.

The women, all aged between 72 and 74, travelled to Dunedin for the weekend event from as far away as London and Hong Kong.

Some attended from Australia, as well as many from throughout New Zealand - particularly Central Otago.

Organising committee member Eleanor Morris, of Dunedin, said some of the reunion attendees had not set foot on the school grounds since leaving almost 60 years ago.

It was wonderful to see old friends and catch up on decades of news, she said.

The reunion began on Friday night with a function at the school. Attendees returned to the grounds at 11.30am on Saturday for a group photograph.

They had lunch in the staff-room before being shown around the establishment.

Then they enjoyed a special cake at afternoon tea.

The group had dinner in East Taieri on Saturday night, and yesterday members went to a Knox Church service before visiting the Orokonui Ecosanctuary.