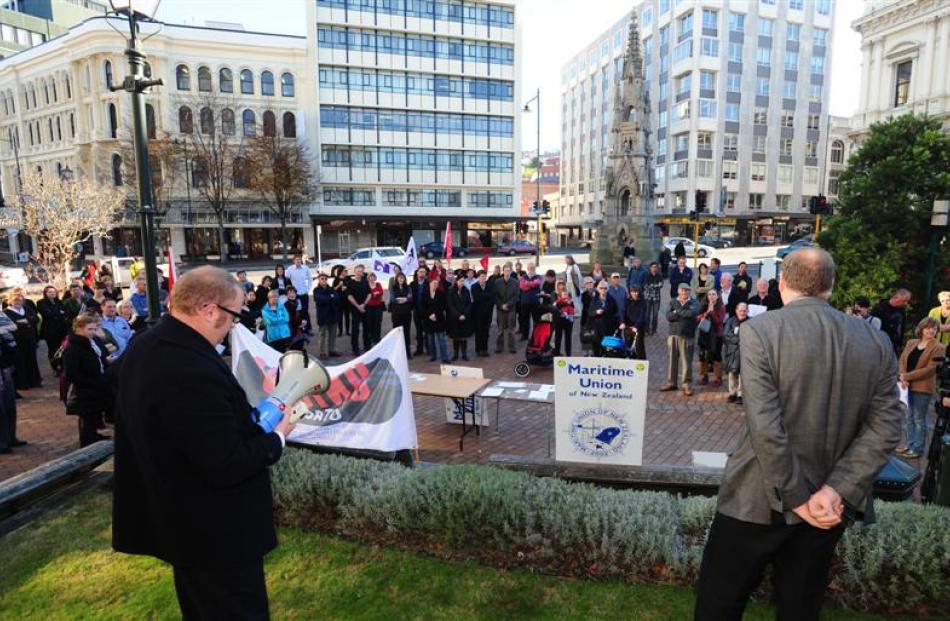 Customers of the metro Post Shop and Kiwibank gather to protest its closure in Dunedin's Exchange yesterday at lunchtime. Victor Billot and Chris Medlicott speak to the crowd. Photo by Craig Baxter.

Business owners, office workers, pensioners and mums are rallying to protest the closure of the Dunedin metro Post Shop and Kiwibank in the Exchange.

Yesterday, about 80 people gathered in the exchange to voice their concerns about the closure of the Princes St post office announced earlier this month and sign a petition and form letters which will be given to the chief executive and board members of New Zealand Post and Kiwibank.

Chris Medlicott, who has a legal firm in the exchange, said losing the post boxes would be a huge "impost" on businesses, which would have to send staff to the Moray Pl post office.

"It's hugely valuable to us. To go to Moray Pl would be bonkers."

Mother of two, Sarah Martin said she was regular user of the post office and it would be hugely sad to see it go.

"It's handy for us and easily accessible."

Lynne Guy, who works in the area, said to force all the Exchange users to go up to Moray Pl would add to the already long queues and delays at that post shop.

Rally organiser Victor Billot said there were already about 1200 signatures on the petition, which showed definite customer support for the post office.

"The reason for closing is that it is not busy enough. That is nonsense."

He would be inviting New Zealand Post representatives to visit the post office and collect the petition and letters on Friday.