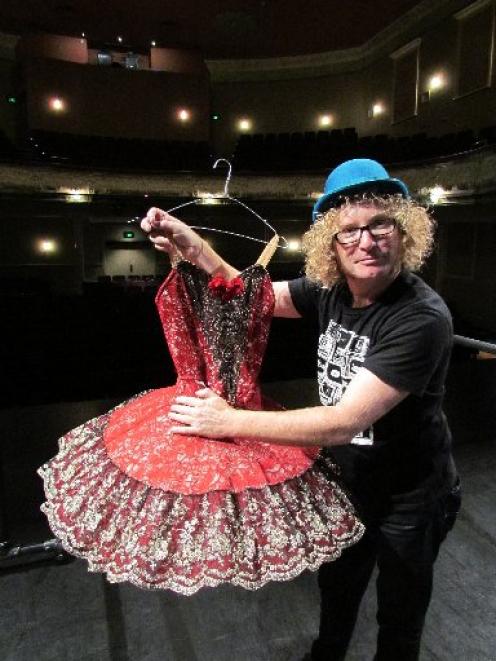 Auckland comedian Te Radar visits the Oamaru Opera House yesterday. Photo by Andrew Ashton.
Te Radar can laugh about it now, but the Auckland-based comedian was worried about treading on a few toes when he made his debut with the Royal New Zealand Ballet.

''But, the first few performances were the most traumatising thing I've ever done in my life. I was terrified of getting in the way of a dancer and I'm not very musical. It's like working in three dimensions.''

Ballet was not on his bucket list, Te Radar, formally known as Andrew Lumsden, said.

''It came right out of the blue. Ballet wasn't something that I'd seen a lot of, or had a lot to do with before.

"But, [RNZB artistic director] Ethan Stiefel had seen one of my shows and was keen for me to be involved.

''It's been going really well. I've been having a lot of fun.

"Being part of a big ensemble cast with so many talented and disciplined people has been amazing.

"You're not free-wheeling, like you do when you walk out on stage as a solo comedian,'' he said.

''I've always been interested in seeing how the dynamics of a group work. You're among all these incredibly physical people and there is such an energy.

"I've seen people come off stage and collapse, because they've put so much into a performance.

"They come off dripping with sweat and absolutely exhausted. I think ballet is more of a sport, than an art.''

Te Radar will narrate a New Zealand version of Peter and the Wolf in the second half of the performance of Tutus on Tour at the Regent Theatre tonight.

The first half is a highlights reel of the RNZB's past 60 years.