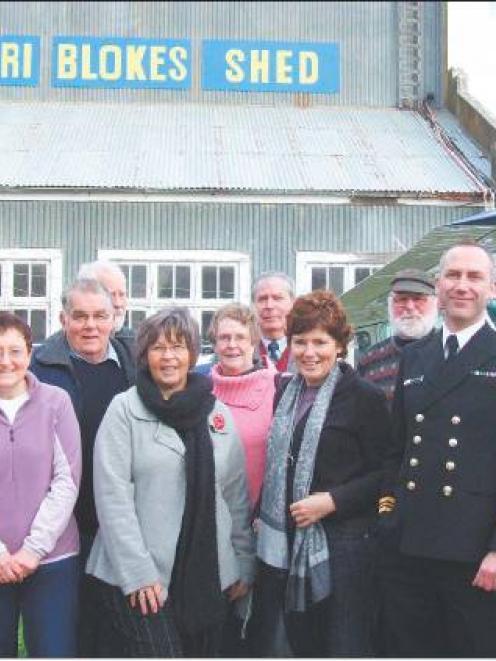 Sign of the times: Members of the Dunedin Blokes’ Shed steering committee and the interim committee of the Taieri Blokes’ Shed gather under the new sign after the shed was officially opened on Saturday.
The ladies were on the barbecue as more than 60 people, predominantly blokes, gathered for the official opening of the Taieri Blokes' Shed on Saturday.
In keeping with the ‘‘blokey way'', speeches were kept short, while the cups of tea and barbecued sausages were in plentiful supply.

Deputy Chief of Navy commodore Bruce Pepperell did the honours and complimented the Dunedin Blokes' Shed steering committee, the community and the men themselves on a successful project.

‘‘This is a tremendous initiative, and I am very pleased that the Navy has been a part of it,'' Comm Pepperell said.

‘‘There is a wonderfully diverse group of people here, and that reflects what a useful concept it is.''
Interim shed chairman Miekle Skelly was delighted with the turnout for the opening and noted that several new members had signed up to join the shed.

‘‘That's what it's all about for us - getting the men involved,'' Mr Skelly said.

Steering committee member Dunedin Resident Naval Officer Lieutenant commander Phil Bradshaw paid tribute to the dedicated group of men who had invested many hours of effort in refurbishing the Taieri Blokes' Shed at Taieri Airport. The establishment of the shed would not have been possible without the support of the Otago Aero Club, which had donated space in its hangar for the shed, Lt-cmdr Bradshaw said.

He also acknowledged the efforts of The Star in promoting the idea of blokes' sheds in Dunedin, and in supporting the concept through its various stages.

Fellow steering committee member Age Concern executive officer Susan Davidson was also delighted at the turnout for Saturday's opening, and was impressed by the transformation of the space.

‘‘It's looking great - the blokes have done an excellent job,'' she said.

The Taieri Blokes' Shed is already set to embark on its first community projects, including making lanterns for Naseby, and working with police to replace vandalised letterboxes for people in need.

A meeting to formalise the governance of the Taieri Blokes' Shed and elect a permanent committee will be held this Saturday, at 2pm, at the shed itself.