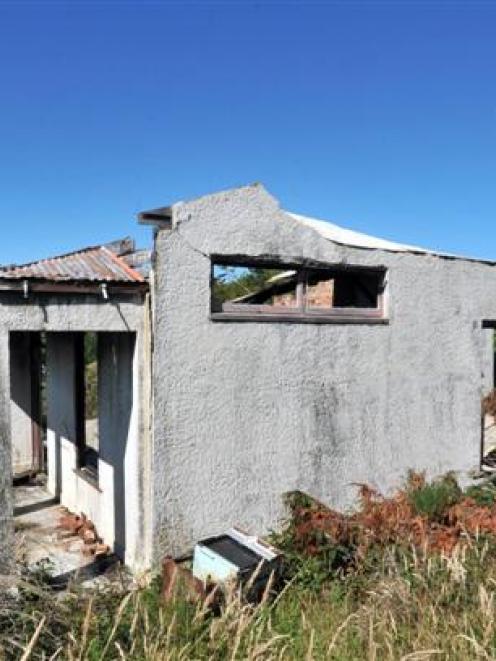 The roughcast Lindsay Rd house has twice been damaged by fire and left in its ravaged state for years by the owner, a Corstorphine resident.

He told the Otago Daily Times he had no plans to demolish what was left of the house or clear the section.

After the first fire, about 12 years ago, he received insurance money and planned to rebuild.

Busy at the time, he stalled for several years, until eventually the house was subject to a suspected arson.

That fire, about six years ago, damaged the property beyond repair.

Asked about the house and neighbours' concerns, the owner said he did not think the property posed a risk to anyone.

From time to time he cleared vegetation on the section, but otherwise he had not attempted to do anything with it.

One Lindsay Rd resident described the property as a ''death trap''.

The resident, who asked to remain anonymous, was worried material from the dilapidated section could be blown around in high winds.

He said children and teenagers often went to the property, even though they had been told not to, and they were at risk of being injured.

Another nearby resident said it was only a matter of time before more of the house fell down.

She said the empty section attracted curious teenagers, and she, too, was worried about the safety of people on site.

A manhole where the front door used to be and other uneven patches of ground were masked by the overgrown vegetation, which in itself was a fire risk, she said.

''Kids get inquisitive and go in thinking it's safe to walk through. Something needs to be done. It needed to be done years ago.''

Another neighbour said he did not think the property was dangerous, but he worried about excess vegetation fuelling fires.

There was another empty section in Lindsay Rd which was also a fire risk, he said.

Dunedin City Council building services manager Neil McLeod said the council generally did not involve itself in private property matters, unless an occupied property was deemed unsanitary or dangerous.

Because the Lindsay Rd property was not occupied, it could not be considered either of those things, he said.

''It doesn't meet Building Act criteria, where we would feel we needed to be involved in it.''

The council could become involved if material from the property was blown off site and posed a safety risk to the public, Mr McLeod said.

But, in general, property owners were responsible for their own sections, he said.

''It's really a matter for the owner of the property to sort out if they wish to. Obviously, local kids have no right to be there.''

Mr McLeod said there had been similar cases in Dunedin over the years, usually involving houses damaged by fire.

''If the owner chooses not to fix it up, that's their business,'' he said.