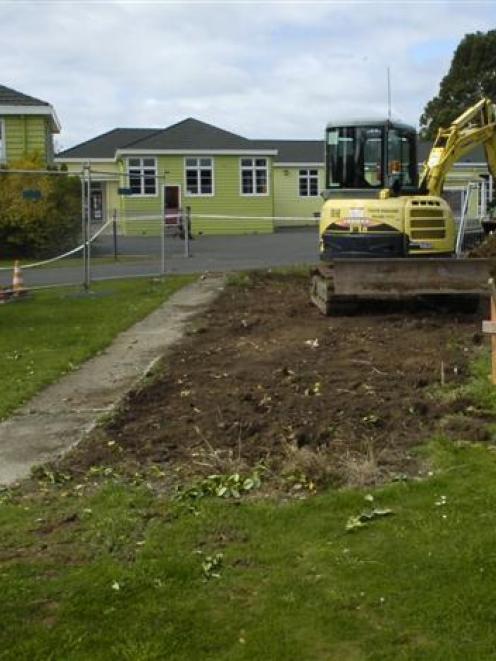 Amalgamated Builders carpenter Sean Laing sets up a profile for the new Southern District Health Board Community Oral Health Service at Dunedin's Macandrew Intermediate School. Photo by Jane Dawber.
Construction of the Southern District Health Board's $530,000 dental hub at Macandrew Intermediate has begun, leaving some in South Dunedin wondering if the Forbury-Macandrew schools merger is "a fait accompli, or a gross waste of taxpayer money".

However, Education Minister Anne Tolley has assured South Dunedin residents no decision on mergers or closures had been made and the health board's Community Oral Health Service would have no impact on her decision.

Mrs Tolley is expected to make a final decision on the fate of the schools in early July.

The construction has raised some concern in South Dunedin, particularly among parents of pupils at Forbury School, Forbury principal Janice Tofia said.

"It must be one of the things that she [Mrs Tolley] will have to factor into her decision.

"Can she close Macandrew Intermediate after the Ministry of Health has built the facility?

"Is this a fait accompli, or is it a gross waste of taxpayers' money, to have a facility on a site of which its fate is unknown?

"What happens to the hub if Macandrew closes?" she asked.

Macandrew Intermediate board of trustees chairwoman Ernie Mather said the issue had been raised with Ministry of Education staff when Mrs Tolley decided the South Dunedin schools review was necessary.

"They said to just carry on as normal - business as usual.

"We're hoping the merger will go on to our site. But we're pretty sure Mrs Tolley hasn't made any decisions about that yet.

"Whether we are here or not, the dental hub is going to be an asset to the community," she said.

Health board project manager Graham Bugler said he had been contacted by the Ministry of Education and asked if the closure of Macandrew Intermediate would affect the board's dental hub.

Mr Bugler said the clinic would be a stand-alone facility and would not be affected if Macandrew was to close.

He said the site was chosen because it was the only school with space available, was well serviced by public transport, and was in a good central location for South Dunedin.

Mrs Tolley said the construction of the facility would have no impact on the education focus of her decision.

"The dental hub has nothing to do with this process, and has no bearing on any decision I will make.

"It will be based on the best educational opportunities for students," she said.