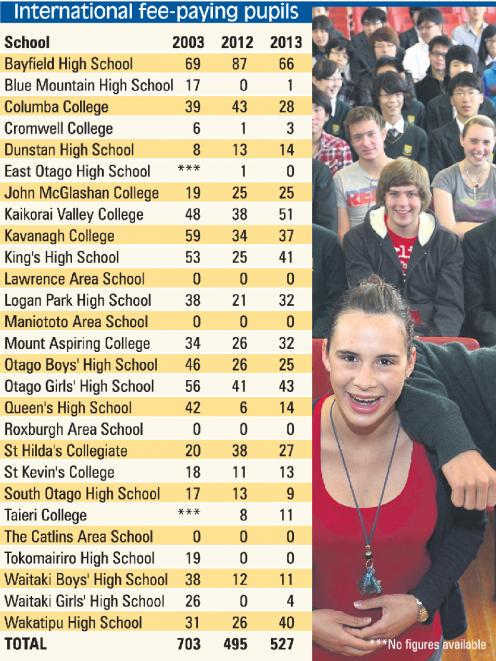 Earlier this year, Ministry of Education figures showed the number of IFP pupils enrolled in Otago schools had dropped 42% in the past decade, from 703 in 2003 to 495 in 2012.

However, Ministry of Education statistics now show the number of IFP pupils in Otago has surpassed last year's total, reaching 527, and that number was expected to grow further before the end of the year.

He believed their parents contributed similar amounts to the local economy through spending on flights, accommodation and other living expenses when they came to visit.

''International students have been bolstering the finances of secondary schools around the country for many years.

''If we didn't have them, our deficits would be even worse than what they are.

''Certainly, the presence of international students in our school improves our financial situation. That's why it's so crucial we maintain our market share,'' Mr Russell said.

Bayfield High School principal Judith Forbes said the concern earlier this year was, if IFP pupil numbers dropped too low, schools might not be able to provide extra teaching staff or extra learning opportunities for all pupils, because the Ministry of Education did not provide enough funding.

While the recent increase in IFP pupil numbers had allayed these fears to a degree, she said many schools would be waiting for next year's IFP numbers before making any large financial commitments.

She said this year, Bayfield had 66 IFP pupils, and staff members recently returned from Japan, Germany and Italy, where they had been promoting the school to potential IFP pupils.

Numbers for next year were looking good, she said.

Many principals believed several factors were influencing the IFP figures, such as the global financial crisis, the Christchurch earthquakes and the Sars virus.

While some believed the upward trend signified the global economy was returning to normal, and the fears of earthquakes and viruses were fading, Mr Russell said the increase was probably down to simple marketing.

''I would guess, numbers have increased because people have gone out and marketed their area and/or school overseas.

''You can't just sit back and wait for them to come to you.''

She said overseas parents, pupils and their agents shopped around when choosing a foreign school for their children to attend, and it was important to provide good homestays, excellent pastoral care, good academic results and a wide range of opportunities.