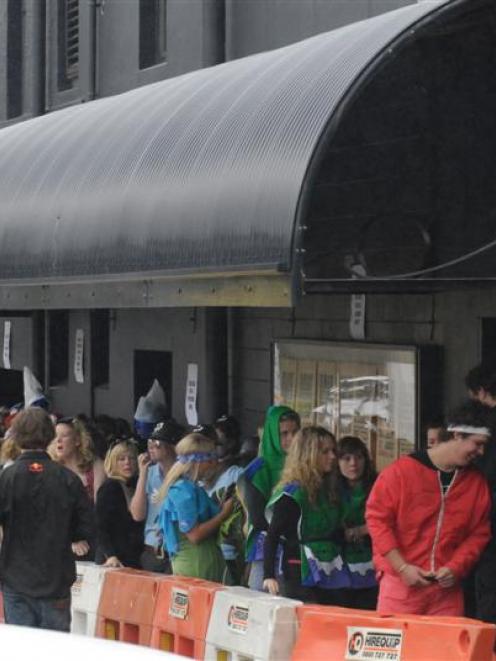 A security guard told the ODT "the majority of them are pissed".

Doors opened at 9.30am and the largely well behaved crowd filed in.

Surrounding streets were filled with groups of colourfully clad students as they made their way to the tavern.

Security guards were keeping the crowd controlled, removing bottles of alcohol from them an ensuring they used the supplied portable toilets.

The students have showed up despite the all-day event, run by the Captain Cook Tavern and offering meals and cheap drinks, being officialy cancelled after the hotel's owners were warned the renewal of their liquor licence was in jeopardy because of it.

The Cookathon started about three years ago as an Orientation Week fixture, and last year was also held twice more during the year.

It has been marked by drunken behaviour outside the pub in recent years, including littering, vomiting, fights and urinating in public, and has attracted a large police presence.

Co-owner of the Captain Cook Tavern, Richard McLeod, declined to comment yesterday on the decision to cancel the Cookathon, or whether future Cookathons would be held.

However, Mr McLeod did say there would be entertainment at the pub from 10am today.

In case lots of people still turned up, the bar had barriers and external toilets ready, he said.

Dunedin police licensing sergeant Wayne Pitcaithly said an objection to the renewal of the bar's liquor licence was lodged last November, but a date was not yet set for a Liquor Licensing Authority (LLA) hearing.

The objection was based around the Cookathon, and at a meeting last Friday police and District Licensing Agency staff had suggested to Mr McLeod that if the event went ahead the licence holder's suitability to hold a liquor licence could be raised when a hearing was held.

All-day events were no longer acceptable, following recent LLA decisions that indicated less tolerance towards promotions which caused general harm to the community and targeted specific sections of the community.

Those indications were now taken into consideration by local authorities when assessing an applicant's suitability to hold a liquor licence, Sgt Pitcaithly said.

The police and the district licensing agency were pleased the official event was cancelled, but realised people would still visit the bar today, so would keep an eye on things, he said.

The University of Otago's chief operating officer, John Patrick, said the cancellation of the Cook-athon was positive, given other efforts to moderate student drinking in North Dunedin.