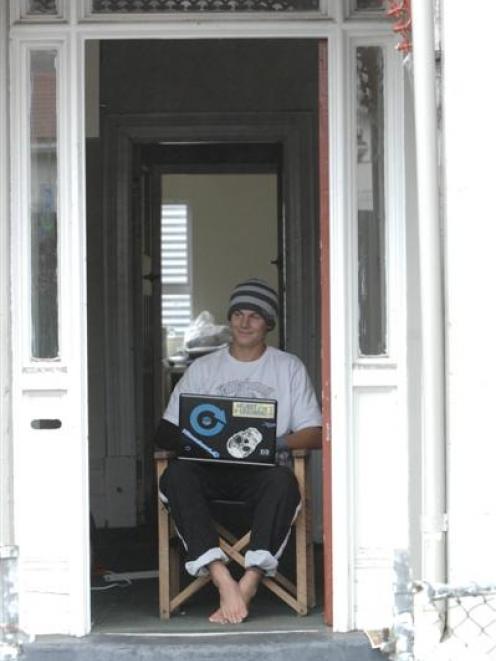 Defying Dunedin's wet weather, second-year geology student Jamie Peters (18), from Russell, keeps warm in his hat and polyprops as he uses his laptop in the doorway of his Castle St flat yesterday. Photo by Linda Robertson.
The weather gods did not smile on Dunedin students as they flocked into town for Orientation 2009, but that did not deter students from making the most of being back in town yesterday.

While many would expect warm weather and sunshine during the month of February, cool southerlies and rain dampened the past few days.

But, classic scenes of students hanging out in their front yards were unchanged.

Jamie Peters (18) surfed the internet while getting some fresh air in his Castle St flat's doorway yesterday.

Though it was cold enough for him to put a beanie on his head and dust off his trusty thermal top, his feet remained bare.

"I'm trying to get them used to the glass," he said.

Having travelled down from the far north town of Russell last week, he had expected it to be a bit warmer.

The temperature gauge from the fridge, transferred to his bedroom door, told him the flat was 10degC, a far cry from the balmy weather he was used to.

While his flat was "bloody cold", any regrets about moving in would come "probably later on".

Heaters and electric blankets had not been required yet, with a feather duvet proving sufficient for him at night, he said.

Otago Polytechnic nursing student Peter Rowntree hoped the weather would improve and was glad to be living in a different flat from last year.

His new flat in Leith St had been holding up well and was much warmer, he said.

The only problem he faced was getting his washing dried.

It had been two and a-half days since he had hung it up and it was still damp.

Flatmate Emma McKay (20) was convinced she had been the first person to catch the "fresher flu" and was missing the heatwave Dunedin experienced last week.

"You have to keep warm," she said.

Katie Roborgh (21) had just arrived back from a trip to Brisbane and had no warm clothes to wear.

Thankfully, they were arriving tonight, which would put an end to her wearing shorts for a while.

"It's crappy that it's raining.

"We were planning to have a swimming pool in the back yard," she said.

A group of Dundas St flatmates were not put off by the rain and enjoyed a few drinks on their porch yesterday afternoon.

After spending six weeks on the West Coast, Sam McArthur (20), from Christchurch, was used to the rain.

"You just have to put on some trousers."

With the flat holding up well, the focus turned to drinking and enjoying Orientation.

The weather had disrupted the Orientation timetable, with College Sports Day postponed from today to tomorrow because of the poor ground conditions.