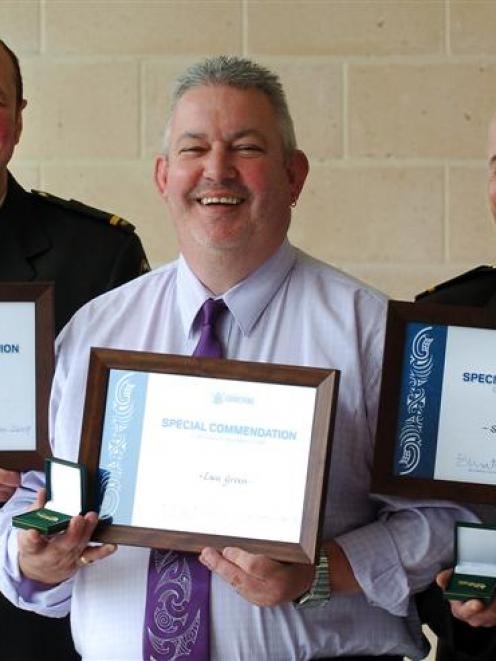 The presentation came nearly seven months after a serious gang-related attack at the prison, and the staff are the first from OCF to receive the new honour.

Court records showed all three men were housed in the same wing.

At the time of the attack, the unit inmates were unlocked and having free time on the wing.

Kukutai set up the incident by throwing a cup of hot water mixed with sugar and jam over the victim's head and upper body.

Armed with prison-made weapons, they simultaneously attacked the victim, stabbing him and punching him around the head and body.

The victim received stab wounds to to his chest and back.

Messrs Dunlop, Groen and Hackett were first on the scene and Mr Matthews said all three showed "incredible selflessness" to defuse a potentially serious incident.

"All three staff members immediately put the safety and security of the prison ahead of their own personal wellbeing . . . it was because of the quick actions and professionalism shown by these men that the situation was brought under control before it developed into something a lot more serious."

While the department tried to create gang-neutral environments, Mr Matthews said it was "a stark reality of prison life" that cannot always happen.

Staff were trained to deal with challenging situations and it was heartening to see the three staff use that training to good effect.

The three placed themselves between the two armed offenders and their target and secured the victim in a cell while keeping the attackers at bay.

Their actions were worthy of both respect and admiration, Mr Matthews said.

Mr Groen said it was clear the attackers wanted to kill the victim.

The situation may have lasted only seconds but felt like minutes.

"That was the most anger and hostility I have seen in my 13-year career."

He praised not only the two officers involved in helping him but the other support staff who responded quickly.

Kukutai and Wereta were both convicted and sentenced to two years and three months' imprisonment when sentenced in the Dunedin District Court in late July.