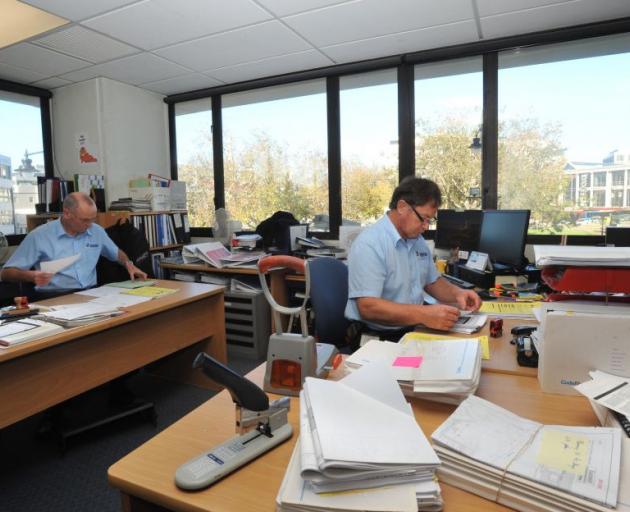 The Dunedin City Council last week acknowledged the time it takes to process building consents is sometimes unacceptable, after complaints from frustrated builders.

The builders believe comments made recently in the Otago Daily Times by the council's building services manager, Neil McLeod, were misleading and show the council is not taking the issue seriously.

But the council says it understands the implications of the delays and is as frustrated as anyone about the situation.

''Believe me, if we could fix it easily, we would have done it by now,'' Mr McLeod said.

Builders baulked at comments Mr McLeod made last month that building consents were taking on average 21 working days to process - a day over the 20-working-day period required by law - and that the longest at that time had been with the council for 32 working days.

Four builders spoken to by the ODT said Mr McLeod must have been mistaken, and cited examples of consents they believed had already been with the council longer than 32 days at the time of his comments.

All claimed to have had, in the past few months, consents that took longer than 32 days to process - a claim the council is investigating.

Mr Sneddon said firms had people leaving them because of the uncertainty and delays, which were ''just not good enough''.

Mr Ward said it was causing issues with planning work.

''You can't mobilise staff until you have a consent. You don't want to pay people for doing nothing; that's not good business.''

And Mr Mains said he was on the verge of laying off men because consents were taking so long and a number of builders he had spoken to were ''very concerned'' the council had not accepted the seriousness of the situation.

They said they were also sometimes asked a second time for information that was not asked for the first time.

''Why don't they ask for the information earlier in the process?'' Mr Mains asked. He also questioned the systems the council used and the whether the staff doing the consenting work had the right skills.

Approached with the builders' concerns, Mr McLeod and his manager Kevin Thompson last week acknowledged they were getting further and further behind.

It was true they were not getting to applications until the 18 or 19th day in some cases, but denied the suggestions applicants were asked for new information in a second request deliberately, saying it would only be a genuine mistake.

They categorically denied requests for information were used as a way to stop the clock and said more information was sought only where it was legally required, noting consents were audited.

Mr McLeod acknowledged the information he shared recently did not paint the fuller figure, particularly as it only considered completed consents over a period.

There were many uncompleted consents in the system at any given time.

Fuller records he provided showed that over the three months from February 1 to April 30, 69% of the 564 consent applications granted by the service were completed within 20 working days.

It took an average of 13 days to process the ones that were completed in that period.

Just under a third of those applications (176) took longer than 20 working days to complete, with the longest of those taking 38 working days.

Of those 176 consents, about half were stopped while further information was sought, the only time the clock was ever stopped.

Mr Thompson said about a third of all applications usually required further information.

''One of the main points is that if all the required information was there in the first place, consents should be able to be processed in a few days.''

Staff were there to assist people with a pre-check before submitting applications, but it was not a detailed check, the likes of which the council could not afford.

He said the reason for the present delays were clear.

It was a combination of a lack of resources - mainly the ''immense difficulty'' they had been having in finding replacements for two consent processing positions vacated at Christmas - and the recent unavailability, due to Christchurch putting pressure on the whole system, of other consenting authorities to process the council's overflow through peaks in applications and when staff numbers were down.

He said they had advertised the positions three times and found only one person as a result.

and three years before they were fully qualified.

Part of the difficulty was that people were going to work in Christchurch instead, and it was also hard find anyone with the particular qualifications processors required, or who wanted to study, outside of work for three years, to get those qualifications.

The other issue was that for several weeks until Thursday last week, no other authorities had any capacity to help process consents.

An Auckland firm was now able to do some, so he hoped the times would reduce.

''We've just been double-whammied this past while.''

Despite these issues, he was confident the system did work well when fully staffed - he noted consent processing times were down to a 10-day average before Christmas, when the full team of 10 were all working.

He was ''absolutely'' confident his staff were appropriately qualified and competent to do the job. They had to be independently assessed to become an accredited processor.

Processors worked by considering each application as it came in and one processor dealt with an application from beginning to end.

It was a new system, installed late last year following concerns from the industry that it was inefficient to have several people dealing with one application.

Staff also worked on a consent until it was completed, before beginning the next, returning to stopped consents when the extra information required came in.

That could slow the process.

The council did employ a person specifically to process consents for small projects, such as installing a fire or building a deck.

''We would love to hire more people. The key to that is having the right people available to hire,'' Mr Thompson said.debbie.porteous@odt.co.nz