Looking out over Foulden Maar, near Middlemarch. PHOTO: KIMBERLEY COLLINS
Pressure  is mounting on the Government to save an internationally significant fossil site near Middlemarch from being consumed by a proposed multimillion-dollar diatomite mine.

Opposition to the controversial mining project is growing. 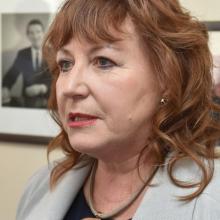 But Dunedin South MP Clare Curran says she supports the proposal in the Otago hinterland and the public lack the full story due to the slow overseas investment approval process.

Australian company Plaman Resources, which owns the site, wants to mine up to 500,000 tonnes of diatomite as an animal feed supplement, but is waiting on approval from the Overseas Investment Office to buy a neighbouring farm.

Ms Curran was frustrated there was still no decision 15 months after the application was made and had written to Conservation and Land Information Minister Eugenie Sage about the situation.

If approval was granted, a resource consent process would still need to be followed, she said.

"There will be the ability for the local community and anyone else to support or reject the project and have a public discussion at that point and the delay in the OIO process has been hampering the ability to have a proper conversation about it.''

Because of the commercial sensitivity surrounding the application much of the information was not yet public, she said.

Ms Curran said she had talked to company representatives at the site and had been given assurances about the nature of the project and the economic impact it could have on the region.

Former Labour minister Clayton Cosgrove has been hired by the company as an adviser but Ms Curran said she met the company's New Zealand representatives directly and not through an intermediary.

Concerns about the low quality of the diatomite at the site and the destruction of the entire fossil field were unfounded, she said.

"I do want the community to have the opportunity to ask their questions and have them answered and also accept any extraction process involves change in a community, but let's actually discuss facts instead of misinformation.''

A spokesman for Ms Sage said as a decision had not been made on Plaman's application and the minister's role was as a decision-maker in the process, it was not appropriate for her to comment.

Former prime minister Helen Clark has publicly declared her opposition to the mine and said the site should be granted a protected status.

As well as Miss Clark, there has been opposition from the scientific community who say the site is the only one of its kind in the southern hemisphere.

Associate Prof Daphne Lee, of the University of Otago geology department, has extensively studied the maar and written more than 40 papers about the fossils she has found there.

A document authored by investment bankers Goldman Sachs and leaked to the Otago Daily Times suggests the mine would only be commercially viable if full production forecasts were met.

Plaman Resources had previously given assurances the site would remain available for scientific research, but it was hard to imagine any research co-existing with a full production mine, Prof Lee said.

"If it was possible to do limited mining and keep half the deposit intact for future scientific research I think that would be an option, but from reading about the report that wouldn't be an option.''

A similar site in Germany is a Unesco World Heritage Site and the maar was as significant, she said.

Plaman New Zealand general manager Craig Pilcher did not respond to a request for comment yesterday.

These are the facts. A bloated mining corporation wants to make millions of dollars it doesn't need by destroying a beautiful natural area that the world DOES need. To dig up a substance no animal wants to eat, so it can be fed to billions of animals who have no choice, so they in turn can make millions for other bloated corporations by being fed to millions of people who don't need to eat them, but do so out of greed, despite knowing that animal based agriculture is unsustainable and causing significant environmental damage. What other facts could possibly matter?