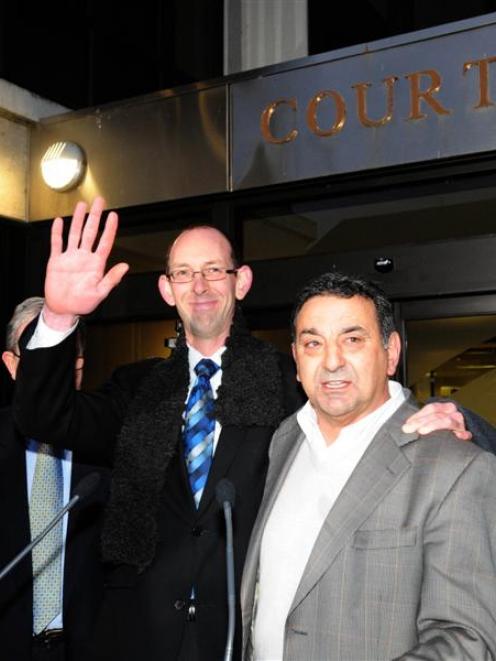 David Bain and supporter Joe Karam face up to a huge scrum of media and cheering public outside the High Court at Christchurch yesterday. Photo by Craig Baxter.
David Bain says he still loves his father, but has stopped short of saying he forgives him for the murder of his immediate family.

Mr Bain (37) gathered with friends and supporters last night at a Christchurch hotel to celebrate after extraordinary scenes when he was acquitted of the murders of his parents and three siblings.

His supporters in a packed High Court at Christchurch greeted the five "not guilty" verdicts with loud cheers, applause and jubilation.

Long-time campaigner Joe Karam and his family were downstairs, close to the dock where Mr Bain stood motionless to hear the jury's unanimous decision.

The seven women and five men had deliberated for five hours and 50 minutes at the end of the 13-week trial before reaching their finding about 4.45pm yesterday.

Members of the jury cried and hugged Mr Bain after the verdicts were delivered.

Two jurors were seen leaving the hotel where Mr Bain was celebrating.

In an interview last night, Mr Bain said he was "still feeling a bit on the numb side".

"But I have had a good blub, and I have been able to sort of release some of the pent-up emotions that have been building up over the last three months.

"Now that I am with my friends, I'm obviously more comfortable and able to relax a bit more. I'm just feeling, I guess, so relieved that this is over."

Justice Graham Panckhurst had on Thursday put the question to the jury: "Was it Robin, was it David?"After the verdicts yesterday, Mr Bain confirmed he still loved his father despite what the jury had found.

"The only way I can explain that is that he was my father. And my mother, my sisters and my brother, they are my family. They are all I ever knew as the close people in my life up until that point.

"And so, they will always have a close and very strong part of my life.

"There's nothing ever that's going to change that."

Asked if he could forgive his father, Mr Bain said: "As far as that question is concerned, I would just prefer to stick to that point at this stage. Any in-depth discussion is for another time".

He said his chief supporter, former All Black Joe Karam, and Mr Karam's family, had become "like a second family" to him.

Mr Karam said Mr Bain had been to his family weddings, and he looked forward to going to Mr Bain's wedding one day.

"And I'm sure he will get a gorgeous wife too."

Asked what was ahead for him now, Mr Bain said: "Well, I haven't thought about that until ... obviously this moment is now a chance to start thinking about that type of stuff.

"Plans will have to be developed.

"Up until this point I have just not had the opportunity to make those sort of plans or decisions. At this moment, I can't think clearly enough to string a sentence together.

"When I wake up tomorrow I'll start making some plans."

Joe Karam's son, Matthew, thought it was unlikely Mr Bain would return to live in Dunedin, because he would be too recognised in the city.

It would be tough, too, for him to have a reconciliation with his aunts and uncles because they had given evidence for the prosecution.

"It would be a pretty major bridge to cross, I would have thought."

Outside the courthouse, Joe Karam was critical of the fact that within days of emerging from the same doors two years ago, they had been forced to embark on what no doubt would go down in New Zealand history as "the criminal trial of the century".

"What's really mattered is the truth, as I said it was 13 years ago, has finally fallen where it has always been," Mr Karam said.

And he said it had only been a "very, very unfortunate attitude by various authorities" that had caused "this thing" to last till 2009 and put "this good man here through what he's been through".

He described Mr Bain as an innocent man beaten down by "various myths and legends fuelled by very irresponsible reporting over the years".

And he said he had had no doubts over the years since he became involved in the case in 1996.

Mr Karam appeared the most unruffled as Mr Bain and his supporters made their way out of the courthouse.

"I've known this for years."

One jury member stopped Mr Karam to ask for his autograph.

On the ground floor of the courthouse, a few jurors came forward to hug Mr Bain.

Lead defence counsel Michael Reed QC said the trial had been "ridiculously expensive", with millions of dollars having to be spent.

It had been "a bad mistake to bring it".

Mr Reed said he hoped Mr Bain's relatives who supported him would give back some of the money they inherited from the Bain family estate.

"I hope they'll be generous."

Christina Gibb, a friend and supporter of Mr Bain, said it was huge relief after "such an emotional journey".

Asked if they were shocked about the verdict, Mr Clark said he could not say.