Funding options for a new kerbside rubbish and recycling scheme will be decided by the Dunedin City Council this week.

Different combinations of general rates, targeted rates, a fixed-user charge or a pay-as-you-throw option could be chosen.

Last year, councillors decided a four-bin set-up for kerbside collection was their preference — rubbish, recycling, glass and food scraps — and households may opt for a fifth bin for green waste. 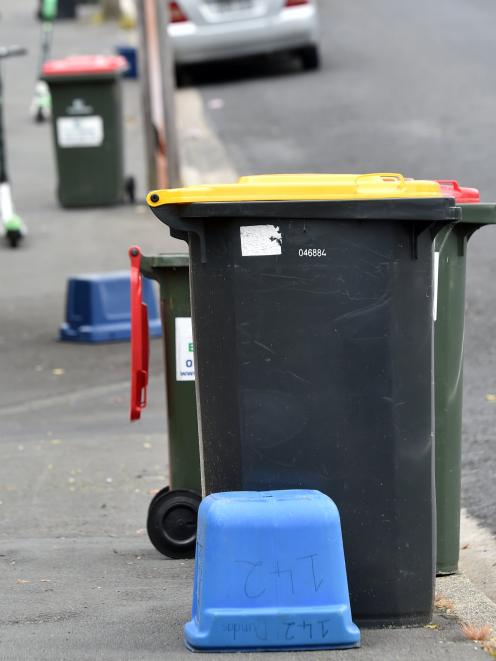 A three-bin system for rubbish, recycling and glass, and no separate service for food scraps or green waste — was chosen as an alternative option.

Both options will be consulted on with the public in March as part of the council’s 10-year plan.

Councillors will decide on a preferred funding source to be used for each kerbside bin this week.

Residents might pay for the collection through general rates, targeted rates, a fixed-user charge or a pay-as-you-throw option outlined in four options.

In the report, staff recommend the four-bin set-up be funded through targeted rates, with the fifth green waste bin funded through a fixed user charge.

This would ensure a simple system for council staff and residents and could ensure collection in an equitable manner across residents, it said.

A pay-as-you-throw option for rubbish or garden waste collection would allow residents to pay for the service when needed.

However, the report said there was no large-scale technology for the pay-as-you-throw service, and would likely have to include a prepaid tag or system initially, which would be more expensive to operate.

If the favoured option was implemented, households could be expected to pay between $270 and $310 a year in a targeted rate and an optional garden waste service could add $140 to $180.

The council’s estimated initial capital spend would be an estimated $20.6million.

If residents preferred the three-bin system, that would drop to $9.9million.

After a funding decision is made at this week’s council meeting, public consultation on both collection options will begin on March 24.

The next contract for kerbside collection is due to start in July, 2022.

Waste collection and disposal in a safe environmentally friendly way should be considered as an essential core service of the council and therefore part of the general rates. The DCC need to make cuts to non-essential funding to avoid rate increases.

Pat, if it were "considered as an essential core service ... part of the general rates" the council wouldn't be able to collect extra charges on top of the exorbitant rates increases without looking even more incompetent at managing finances than they do already. Putting up the price of everything they do, is their way of disguising just how much they are grabbing out of our pockets.

We already have a pay-as-you-throw service with the bags. Just where do they think people are going to get the money from to pay for this on top of an existing rates rise? We're right in the middle of paying off that bloody stadium, and someone thinks it's a great idea to bail out the sports hall of fame. This council is a death of 1000 cuts for its ratepayers at the moment!

True. If I were a betting man I'd chalk up the odds as follows:
Chances of the changes costing less in future 50-1 against. More would come in at 2-1. Added to the proposed rate and power increases. I'm not normally a fan of privatising what were previously publicly held assets, but the mismanagement by the DCC has had me thinking that we couldn't be worse off if Aurora was sold off to a more professionally run outfit.