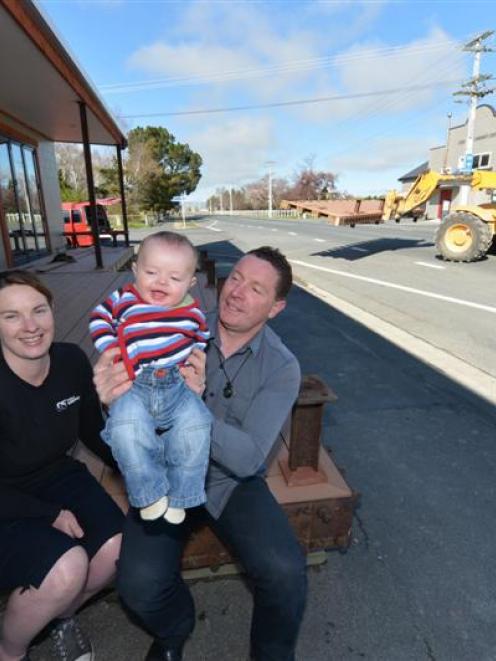 Pip and Dave Thomson, with baby Jules (5 months) at their Middlemarch business, as work to remove the shop's front deck continues behind them. Photo by Stephen Jaquiery.
A Middlemarch woman's attempt to improve her business by extending a front deck has fallen foul of the New Zealand Transport Agency.

Pip Thomson bought the town's old general store on the main street a few years ago and spent about $120,000 renovating it.

The upgrades included a deck in front of the building, from which she operates her business, Cycle Surgery Rail Trail Ltd.

But a deck extension protruded 1.8m over the 3.5m footpath along State Highway 87 and the NZTA said it blocked motorists' view at the highway intersection with Aberafon St.

The NZTA said visibility at the intersection was about 20m less than minimum legal requirements for give-way-controlled intersections.

Having also received letters of concern from Middlemarch police and the Strath Taieri Community Board, the NZTA denied Mrs Thomson's retrospective application for a licence to occupy road reserve, which she made when she realised it was required.

DCC chief building control officer Neil McLeod said Mrs Thomson's initial deck was given consent by the council, but the extension over road reserve was under the NZTA's jurisdiction.

NZTA Otago Southland operations manager Roger Bailey said structures on state highway road reserve were only permitted in exceptional circumstances and when public safety was not at risk. Aside from the fact Mrs Thomson's deck fell short of minimum legal requirements, Mr Bailey said he could not ignore "credible" letters from the police and community board warning of the dangers posed by the deck extension.

"We've tried to be fair and reasonable, and looked at it objectively. Of particular concern to the agency is the police have advised of several near misses at the intersection," he said.

Visibility was so bad the NZTA planned to move forward give-way lines and install no-stopping signs to ensure no vehicles parked within 5m of the intersection.

Mrs Thomson said the deck had been in place since February last year and had not caused any traffic problems.

"Right along we've done as we've been asked and what we've believed to be right. The only thing I've had has been positive comments from people coming and saying it [the deck] is an improvement," she said.

Mrs Thomson said it was a shame her attempt to improve visitors' experience was thwarted. She believed complaints to the NZTA about the deck were motivated by a personal dispute in the town involving her husband, an allegation denied by those in question.