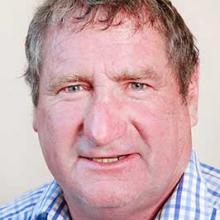 Bevan Dowling
Disgraced former Strath Taieri Community Board member Bevan Dowling yesterday fired parting shots at his detractors, labelling them a "couple of spoilt brats" who put themselves before the community.

Dowling resigned from the board earlier this month after being convicted on August 17 of assaulting a woman after returning home from the pub.

His resignation followed a vote of no confidence being moved at the board’s September 7 meeting by member Norma Emerson. The motion failed after only Cr Christine Garey supported it.

Dowling (59) pulled no punches when he spoke during the public forum of yesterday’s board meeting in Middlemarch.

He labelled those who called for him to step down "spoilt brats who have ulterior motives".

During the tirade he alluded to Mrs Emerson’s South African origins and said: "I expect those from other countries of questionable politics ... could have skeletons in their closets".

He also hit out at Dunedin Mayor Dave Cull, who had called for his resignation, and the Dunedin City Council.

"Earlier this year I was involved in a regrettable incident... after a concerted campaign by the Otago Daily Times, the Dunedin City Council and others, I felt harassed out of a legally-elected position."

Despite the conviction for the assault, in which the victim suffered bruising and abrasions, Dowling was not obliged to leave his board post, as the maximum sentence for the offence was one year’s jail.

Under local governance laws, elected members are  ineligible to continue serving only if convicted of an offence which carries a minimum two-year sentence of imprisonment.

Dowling said his decision to resign came because of the "toll" the events following the conviction had taken on him.

He finished his speech by hitting out at "those who put their own supposed morals before those they are elected to represent".

After reading his statement, Dowling stood up and walked out. Later at the meeting board chairman Barry Williams paid tribute to Dowling’s seven year contribution to the community.

"There is a fair gap to be filled," he said.

Mr Williams used his chairman’s report to express his disappointment that Mrs Emerson had spoken to the ODT following the last board meeting, despite a passed motion that all media comment should come from the Dunedin City Council.

Mrs Emerson was unable to respond because the comment came during Mr Williams’ report.

Following the meeting, Mrs Emerson said she was disappointed the incident had driven a wedge in the board.

"It’s not the type of action I would have liked to take,’’ she said of her vote of no confidence.

"I would have preferred if if he did the right thing and resigned. I don’t think it would have developed into this big circus.

"What I can’t understand is how the rest of the board can question my integrity in this matter."

Cr Garey did not wish to address Dowling’s remarks, saying: "The matter before the Strath Taieri Community Board is resolved with the resignation of Bevan Dowling and I’m looking forward to working with the new member once they are elected".

Dowling’s resignation has triggered a by-election and the successful candidate  will  be declared on December 23.

Nothing in local governance law precludes Dowling from standing for the seat in the by-election.

By yesterday, no nominations had been received.