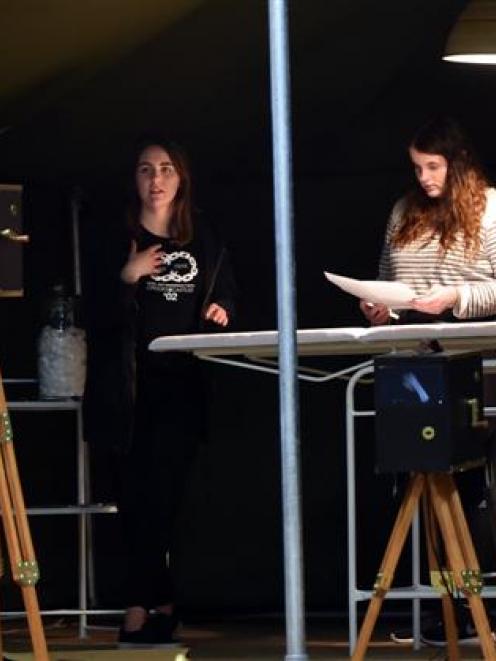 Since late last year several groups of third year bachelor of design, communication, students from the polytechnic have poured their time and creativity into the project.

Some of the students were still working behind the scenes at the museum yesterday, adding finishing touches to the ''Who Cared? Otago Nurses in WWI'' exhibition, which opens on Saturday.

This immersive and interactive exhibition is based on the historical novel Lives We Leave Behind, by Dunedin author Dr Maxine Alterio.

The exhibition's story follows three nurses serving in France as they care for wounded soldiers, illustrating the contribution of women from Otago, and New Zealand, during the Great War.

In the exhibition, being held in the museum's 1877 gallery, visitors are transported to the No1 New Zealand Stationary Hospital in Wisques, France, in the autumn of 1917. And there, museum visitors can explore a temporary surgery, hospital ward and a Nissen hut where the nurses lived.

In the Nissen hut, visitors get an insight into the thoughts, feelings and lives of the nurses who left New Zealand for war. This exhibition uses audio visual elements and touchable materials to tell the nurses' stories.

Museum head of design Craig Scott said the museum and polytechnic participants ''want to offer a different perspective on the war''.

''Our focus is on the nurses who served, and even gave their lives, to care for soldiers fighting in World War 1.

''This is a less well known story, and one which we are honoured to share.''

Museum organisers did not want to take anything away from the soldiers who served but aimed to ''provide a narrative that works alongside their stories'', he said.

Mr Scott, who has a bachelor of design studies, communication, degree from the polytechnic, said he was enjoying working closely with senior students from the same study programme.

''I like the aspect of seeing people grow and being able to mentor them,'' he said.

The Otago Museum and Otago Polytechnic have signed a memorandum of understanding to foster collaborative work, and the two institutions also worked closely together in producing ''Survival Factor'', an interactive science linked exhibition, in 2010.