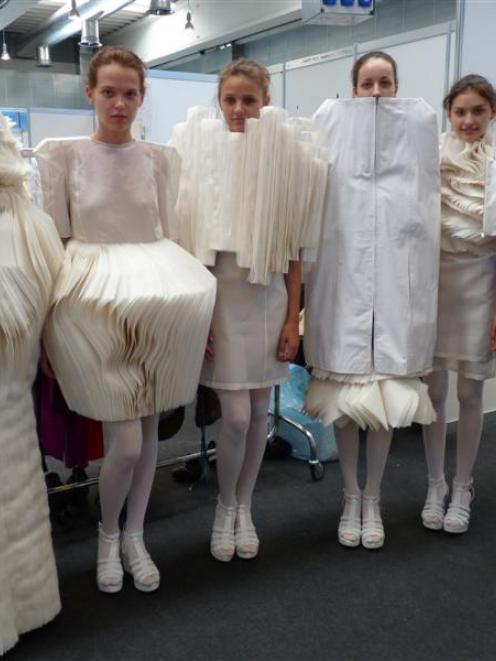 Roxanna Zamani, with models wearing her Incongruous collection, gets ready for judging at the Mittelmoda Fashion Awards, in Gorizia, Italy, last month.
Roxanna Zamani is back on home soil with two international fashion awards under her belt, and has hit the ground running with three fashion weeks in her sights.

The Otago Polytechnic School of Fashion graduate arrived home in Invercargill this week and spent most of yesterday sewing a new collection and applying for internships in international fashion houses.

"It's going good, despite a lack of sleep. I'm charging on," she said.

In July, she won the Wedding Italian Style Award at the prestigious Mittelmoda Fashion Awards in Gorizia, Italy with her Incongruous collection, claiming a place in Milan Fashion Week and 2500 ($NZ4480).

"I feel really honoured and privileged to even be accepted to attend, let alone to win something."

Mittelmoda one of the best experiences of her life, and a "really cool learning experience", she said.

Despite feeling a "little bit green" when she arrived, Miss Zamani learned the importance of networking and how to apply for internships.

"I was totally blown away by the calibre of work and the people."

While travelling in Europe afterwards, Miss Zamani applied for the FashionTV Oceania Online Designer Award and had to send her collection from Turkey to Australia when she was told she was a finalist.

While on a train to France, she learnt she had won the evening wear section and the overall prize.

She gained entry to Perth Fashion Festival next month and a "look-book" photo shoot in Melbourne, which will be broadcast on Foxtel and Sky.

"I get so blown away because I do something I absolutely love and it's amazing that people like my work as well," she said.

Next up is the Westpac Young Fashion Designer Competition.

She has been selected as a finalist, with public voting on social networking site Facebook set to determine the top three to show at New Zealand Fashion Week, also next month.

Showing at home was an ultimate goal of hers.

"It's not about winning - it's about being there to show.

"It's one of those things I would really, really love to do because it's New Zealand."

In preparation, Miss Zamani will spend the next few weeks creating three new garments to form an extension of her Incongruous collection.

"I'm bursting to do a new collection so it's quite cool to be able to work a bit more on my Incongruous collection for the Westpac competition, and then I'll work on a new one."

Also on the burner were negotiations with international labels for an internship.

"I'm in limbo with different things, so I'm seeing how things go," she said.

Looking ahead, she hoped to have her own label, based in New Zealand.